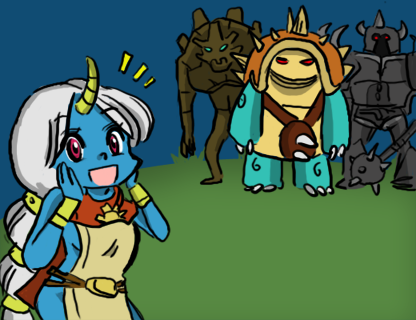 Do you play League of Legends? It’s a MMOBA (Massive Multiplayer Battle Arena) which is very similar to DoTA and Heroes of Newerth.

I go by the same name I use over the web (Tomio Satou) and play at Philippine Servers which Garena handles.

I have been playing the game for more than a year now.  It’s the only game that I can play without consuming so much time. (Let’s be honest, MMORPGs demand too much time).

The game has an anime-ish feel to it and is very team oriented that’s why I got hooked.

With it’s diverse Champion (Hero) roster and engaging Lore It’s no wonder how fans could produce a lot of art for the game.

There are a lot of art over the web but this specific blog caught my attention.  http://soraka.blogspot.com/

Soraka with Rammus, Malphite and Mordekaiser

As the link to blog describes it, The artist initially focused on League’s support champion,  Soraka. His art style suited the game characters very well and I really love his sense of humor.  After awhile he then branched out into creating webcomics involving other champions in the game.

There’s nothing like reading/viewing funny webcomics which involve characters that you grew to love and you see so often.  It also lessens the stress after through a bad game.

Lendo does not have a specific time frame of webcomic releases but one thing’s for sure when he does release a comic it’ll definitely crack you up.

If you’re interested in knowing more about League of Legends or planning to try the game out here are some links that will help you out. Don’t worry about subscription fees, LoL is free to play.

Well, that it for me. I hope you enjoyed reading this entry as much as I enjoyed writing it. 🙂

Hope to see you in the Fields of Justice! Until Next Time!