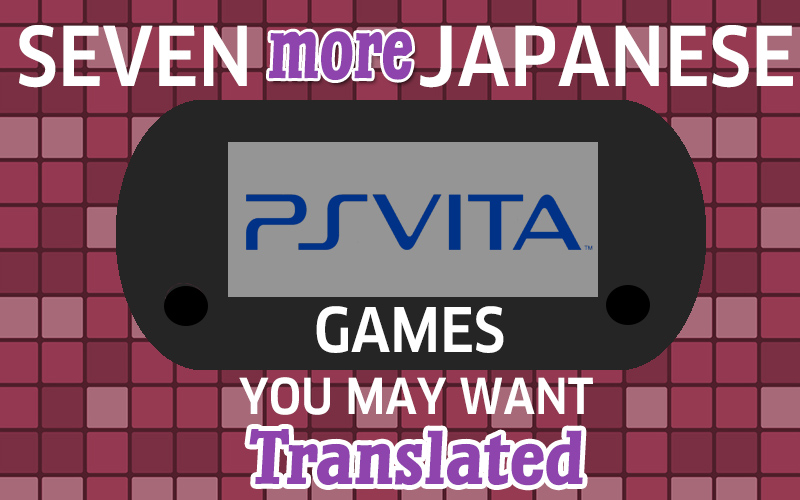 Almost a year has passed since we gave you a short list of Japanese PlayStation VITA games that many wished to be localized in English. Luckily, some of them were granted an English port (hurray for Project Diva f and Phantasy Star Online 2!); yet, there are more video games from Japan coming out for PS Vita for 2014.

Should you have this portable console, and want to search and get jelly on more Japanese games, keep reading!

A romantic light novel series by Yuyuko Takemiya (Toradora!), Golden Time is gradually gaining popularity with its anime adaptation, and recently, a visual novel version of the series has been green-lit for PlayStation Vita. Golden Time: Vivid Memories features a dating sim gameplay, so the protagonist can engage in conversations with the other heroines of the story, and even pursue a romantic relationship with them. There are also mini-games included in certain scenes. Golden Time Vivid Memories is going to be out on March 2014.

The gameplay is still the same (hit the correct buttons displayed with proper timing), with new songs AND returning songs from previous Project Diva games, remastered! If you loved the songs Double Lariat, Packaged, Romeo and Cinderella, Ura-Omote Lovers, The World is Mine, and more from PD1 and PD2, then this will most likely be a must-buy for you (myself included, why can’t March come any sooner Q_Q).

The same Vocaloid cast will also be present, and additional mini-games are confirmed to be included in the DIVA room (for those who are new to Project Diva games, this is a feature where you can feed, play, and take care of your Vocaloid character, like a pet lol).

Project Diva f 2nd will be available in both PS Vita and PS3, and will be out in the Japanese market on March 6, 2014.

Want to see a wide roster of female anime characters in one role-playing tactical game? Super Heroine Chronicle might tickle your fancy, as you can choose to summon heroines from various anime series like Kyousougiga, Senki Zesshou Symphogear, Super Sonico, Higurashi no Naku Koro ni, IS Infinite Stratos, Zero no Tsukaima, and more!

The gameplay closely resembles that of Super Robot Wars, wherein playable characters have to complete scenario objectives, and to do this, the player must plan and strategize his battle lineup,  commands, and heroine skills.  There are also features wherein the player can improve the heroine’s skills and equipment by completing dialogs and unlocking certain scenes.

Super Heroine Chronicle is published by Namco Bandai Games, and is scheduled to release for both PS Vita and PS3 on February 2014.

If you like role-playing games with cute and sexually-appealing monster girls, then this might just be a game you’d want to see in English. Genkai Tokki Moero Chronicle shows us a universe where humans and monster girls live in separate territories (Loytium in the west and Monstopia in the east).

Io, our timid, disinterested but kind-hearted protagonist, was forced by his fellow villagers to set out on a journey to save the world (Oh woooow) from the chaos that monster girls might bring. Io sets foot outside the village with his childhood friend Lilia, and will meet more monster girls as they explore further in Monstopia. Io also shows a genophobic personality, as he seemed to avoid contact with girls (except Lilia), fearing they’d call him a pervert. As the game progresses, though, I have a feeling he’d be overcoming that obstacle at some point, if you know what I mean.

This game was developed by Compile Heart (Fairy Fencer f, Hyperdimension Neptunia, Cross Edge) and is expected to be out in stores in Japan by April 24, 2014.

As many know by know, To Love-Ru is a manga and anime series that specializes in fanservice, romance, fanservice, comedy, and more fanservice. As teaser videos for To-Love Ru Darkness: Battle Ecstasy were released over the web, one would undoubtedly say how the game will not disappoint its fans when it hits shelves in Japan this May.

In Battle Ecstasy, the goal is for the main character (Rito) to create his own harem with the different heroines by interacting with them, and use their strength to clear dungeons and fulfill their requests.  Players can also give certain battle equipment to them for customization and better stats. One of the biggest catches here is that players can “become intimate with a heroine” by utilizing the touch screen and rear touch panel.

Developed and published by Furyu Games, TLR Darkness: Battle Ecstasy will be released on May 22, 2014, and will be available in hard and digital format.

Following the release of the first Sword Art Online game (Infinity Moment) on PSP last year, comes a sequel from Namco Bandai Games, “Sword Art Online: Hollow Fragment.” The story is said to be set in the same timeline as the first game, with an introduction of a new character named Filia.

Like Infinity Moment, Hallow Fragment’s gameplay utilizes real-time battles, with a decent range of area exploration. Players can only control Kirito directly, and issue simple AI commands to his partymates (heal, defend, attack, switch, etc). Apart from main quests, players can also get sidequests from various NPCs. The game is expected to be out in Japan on April 24, 2014.

SHAFT’s anime original, Mahou Shoujo Madoka Magica, has become one of the most ground-breaking shows of 2011, due its unique and eye-catching animation style, star-studded cast and staff, impeccable music, and a drastically unexpected plot for a series from a magical girl genre.

Mahou Shoujo Madoka Magica: Battle Pentagram is a 3D action game for PS Vita released in December 19, 2013, and has features that lets you form and strengthen relationships with other magical girls at daytime, which help you battle witches and familiars at nighttime. In addition, it has a hack-and-slash battle system, with special skills getting unlocked as you level up further in the game. You can choose to play as any of the magical girls in the series (Kaname Madoka, Akemi Homura, Miki Sayaka, Sakura Kyoko or Tomoe Mami), with some exceptions with special scenes. The story also follows similarly from the anime series, and there were only minor tweaks at certain parts of it.

Of course, these aren’t the only games coming out this year, but these are some of the most talked about from those outside Japan. You can still find a bunch of upcoming games for PS Vita in Japanese, including:

Which of the following PS Vita games would you like to be localized in English? Let us know in the comments!