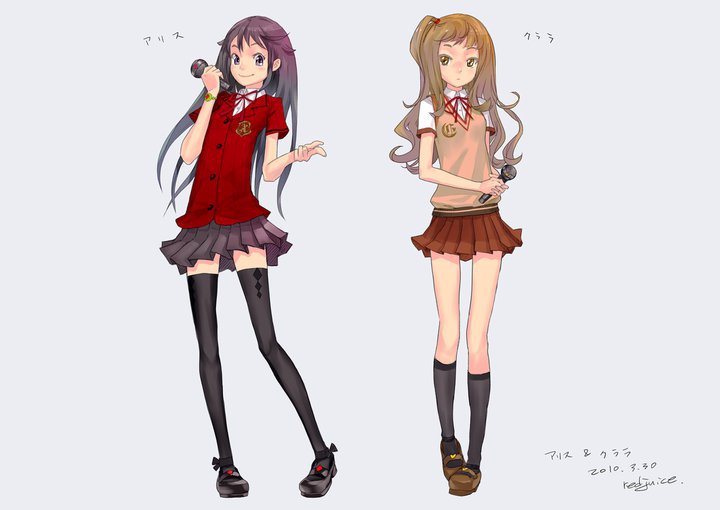 To start off our ClariS week, let’s get to know how the girls got started off on their road to fame.

ClariS is composed of the dynamic duo Alice and Clara. It is important to note right from that start that they are high-school students and need to focus on their schoolwork, and their names are pseudonyms done for anonymity. Both from Hokkaido and friends since kindergarten, they attended the same music school where they started to show promise.

They started off in Nico Nico Douga as Alice☆Clara (ｱﾘｽ★ｸﾗﾗ),  an “utaite” group  in October 2009, doing covers for various anime and Vocaloid songs. Their first cover was a Hatsune Miku song, “STEP TO YOU”.

Their notable anime covers are the OP themes for Toaru Kagaku no Railgun:

It was during this time when they were discovered by the staff of the then-starting LisAni! Magazine, who chose them to sing two exclusive songs composed by famed Vocalid composer Kz (then still under Livetune). The first song was “Drop”, which was featured in LisAni!’s first-ever issue. This issue had a free CD with the track, and also featured the first-ever artwork of the girls (done by redjuice, known for his art in Guilty Crown and some Vocaloid/Supercell albums.) 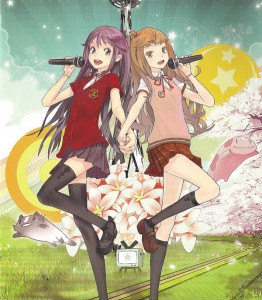 To help identify the two, Alice is the girl with straight hair on the left. Clara is depicted with long hair as well, but wavy. They also had motifs associated with them from the start: Alice is usually depicted with an image of the sun, while Clara has an image of the moon (or a crescent). The girls chose these motifs themselves.

About their preferences and traits, Alice loves to dance, is a good swimmer, and her favorite subject is English. Clara is the more musically inclined of the two because of her love of the piano and music as a subject. It is fun to know that both are self-professed otaku, and they have not told anyone (except for their families, of course!) about their debut as musicians or their love of anime. Now where have we heard this before? 😉 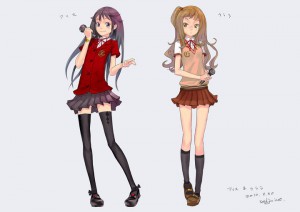 After “Drop”, the two continued to do covers on Nico until the second issue of LisAni!, which had their second song, “君の夢を見よう” (Kimi no Yume wo Miyou – I’ll Be Dreaming Of You). This also had a CD of the song included, with a new piece of artwork from redjuice. This was released July 2010. 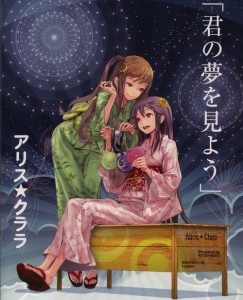 A month later, in Comiket 78, a CD containing both songs was made available for 500 yen, which is now considered one of the rarest collector’s items for ClariS fans. 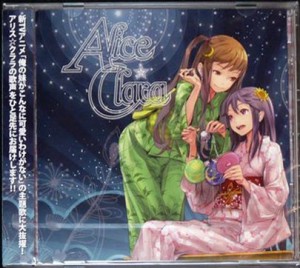 Another month passed, and Sony Music Entertainment Records signed up the girls to do the single that will make them known to the world. . .