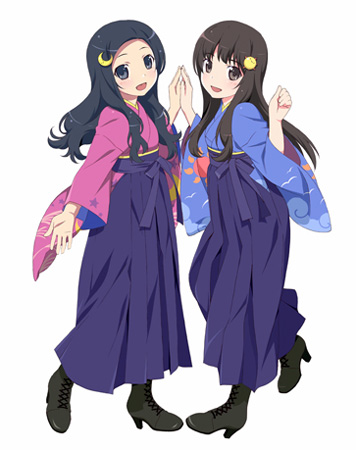 Part 2 of the ClariS story starts now! Last time we covered their Alice☆Clara phase, from their Nico Nico Douga utaite days to the release of their first singles, “Drop” and “Kimi no Yume no Miyou”. In this part, we’ll look at how they turned pro and started to be known worldwide.

In September 2010, Sony Music Entertainment Records signed up Alice and Clara to a record deal, and with this they changed their name to ClariS. The official website lists the meaning of this name: It is a combination of the duo’s names (ｱﾘｽ = Arisu, ｸﾗﾗ = Kurara. ClariS = ｸﾗﾘｽ = KuraRisu) and as per an interview in Oricon, it is also a tribute to a character in the anime movie The Castle of Caligostro, named Clarisse. This name also has a slight reference to the Latin word “Clarus”, which can mean “clear” and “bright”. Perhaps this perfectly described the girls’ vocal ability, since Kz himself noted in an interview that the girls’  bright voices were their best trait and fit perfectly with the pop genre.

One month later, in October 2010, their first major debut single as ClariS was released. This single was “irony”, the title song which was composed by Kz. This was used as the OP theme to the popular anime adaptation of  Ore no Imouto ga Konna ni Kawaii Wake ga Nai. (My Little Sister Can’t Be This Cute.) This was widely received by fans, and it shot up to No. 7 in the Oricon rankings during its debut. With this release came a new illustration for the girls, this time coming from Kanzaki Hiro, the original illustrator for the Ore no Imouto light novel. Their second single titled “Connect” was released in February 2011, just a few months later. This single peaked at #5 in the Oricon charts. The title song was composed by Yuki Kajiura and used as the OP theme to the mahou shoujo anime Puella Magi Madoka Magica, and in January 2012 this single was later awarded the Gold Disc award by the Recording Industry Association of Japan for having more than 100,000 copies shipped in a year. September 2011 came with their third single titled “Nexus”. Once again composed by Kz, the title song was used as the OP to the Oreimo PSP game, Ore no Imōto ga Konna ni Kawaii Wake ga Nai Portable ga Tsuzuku Wake ga Nai. This song was also used as the theme song for the 9th volume of the Oreimo light novel. This single also reached No.5 in Oricon. For this single, Kanzaki Hiro’s original design was used again, with the change being a chibi-fied look for the girls. A few months later, in February 2012, their fourth single titled “Naisho no Hanashi” (Secret Conversation) was released. The title track was composed by Supercell, and was used for the ED theme of Nisemonogatari.  This single reached No. 2 in the Oricon charts, their highest to date.

A new look was given to the girls by the Nisemonogatari artists: