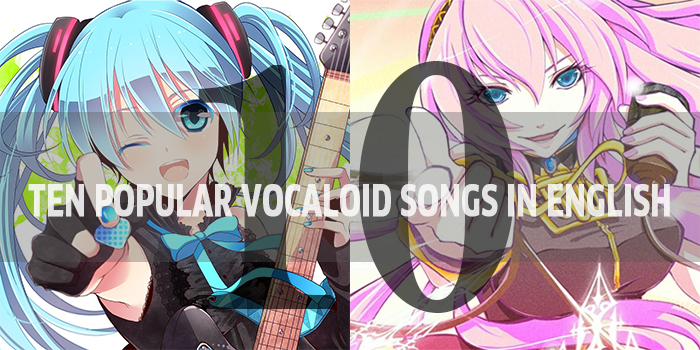 Vocaloid, a Japanese voice synthesizer program, has brought about millions of user-generated songs, many of them turning amateur musicians into professionals. As most Vocaloid songs are composed in Japan, the lyrics are also written in their native language. However, there are quite a number of musically-talented individuals who have found their passion in creating music using the same program. Surprisingly, there is a growing number of English songs sung by Hatsune Miku, Megurine Luka and other Vocaloid characters being uploaded on YouTube. Here are ten of the most popular Vocaloid songs in English in YouTube, based on the number of total views (in random order).

5. Megurine Luka – Someone Like You (Originally sung by Adele)

6. Hatsune Miku – My Heart Will Go On (Originally sung by Celine Dion)

7. Hatsune Miku – Heaven is a Place on Earth (Originally sung by Belinda Carlisle)

All of the songs in the list are performed by either Miku or Luka, as they are the two of the most popular Vocaloid characters right now. There are also covers by others, like Len, Rin, and Kaito, but they’re not often viewed compared to the first two.

Also, some of the songs sound awkward compared to the original counterparts, but as this was done by a voice synthesizing program, there’s still room for appreciation. They also get into you after listening to them after a while. The video below is a good example of it, too (I got leek roll’d lol).

This is another awesome video shared by J-Py. It’s Zedd’s Spectrum, remixed by livetune and performed by Hatsune Miku. Thanks!

Do you have any favorite English song that’s been sung through Vocaloid? Share it with us in the comments!