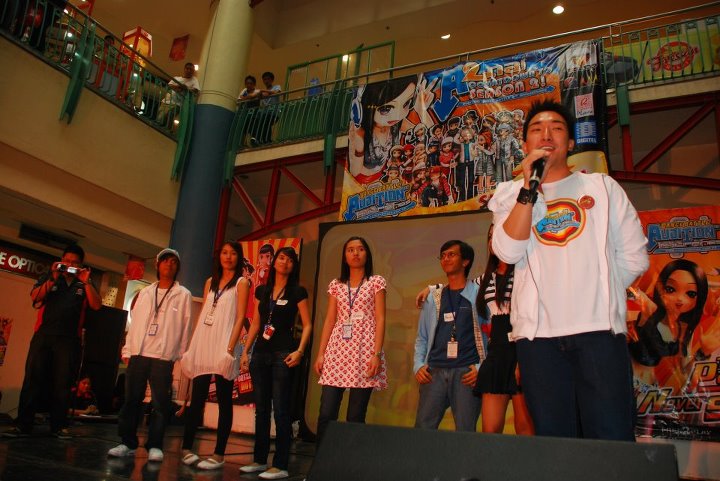 So I’ve been digging my old photos from the huge-ass My Photos folder in my hard drive, and for some reason I came across this old gem of a find: a photo album Audition Online‘s 2nd Anniversary.

The GM’s from the left: Makadesh, Faiga, Hanya, Medea, me, Amethy (CM Jes) and CM Lowe.

I remember being a Game Master for this game during my stint in IP E-Games, and those were the good old days of solid fun with the veteran players. And that was when we got to introduce a bunch of new GM’s on stage, along with a solid dance number from them.

Also in the event was the first time I did a presentation and have hosted a competition for a live event. Being on stage actually made me reaaally nervous– in fact my palms never stopped sweating the whole time I was there. I even had to go to the restroom for at about three times just to pee, and for me to relax! But in the end it went well, and I was able to stop myself from stuttering. This became an eye-opener for me: that I am able to present properly on stage, and I can actually speak publicly and have fun with it. It was at that moment that I finally understood my calling to be a part of the community team.

Me an’ Jes on stage. Rockin’ it out with… contest mechanics.

Yep. Me in action. Explaining why the sun is shining and the sky is blue… just like my jacket.

And yes, I do realize that by being too comfortable on stage actually makes me do… crazy stuff. To think I’d be dancing on stage like that, and to the tune of “Tell Me” by Wondergirls.

Time to get away from the masked menace at the back.

it was also in this year that I was able to tap and engage the community by empowering themselves through the creation of “player-volunteers” that aid the GMs in creating and implementing events, and as well as to keep people alive by keeping a certain level of presence in game.

Yes, it was the year that the Audition Seitoukai (sic) was born.

The Student Council dudes (and dudettes) helping out with the booth. Take note these are from the first batch.

Audition Seitoukai’s idea was born through the merging of forum and game moderation duties and of playing on the community’s penchant for player popularity and identity. This was proved through the success of Audition Interview, which was a website that focused on highlighting certain players in game and by focusing on what are the interests of players in the game.

Matt G. in action, along with our IP E-Games writer, Presea.

Looking back at those moments and having the time of your life while engaging your players and customers gives an exhilerating, and nostalgic feel. After all, your players are your clients, and your clients are your lifeblood. Making them stay remained as a task, but to have them enjoy their stay was a challenge. Your daily mission objective was to make sure that all are properly taken care of. If you don’t who will?

Players battling it out on the virtual dance floor.

Keeping players happy with the game is both an art and a science: You know that there is a standard way of doing things, and that statistic and prior knowledge of both the game and technicalities is needed; and at the same time, you should have a feel and a grasp on how to project and identify the customer’s needs– even before they even relize it. Getting ahead of what they need and want and providing the means for them while mediating and straddling the line of player retention and corporate policy– that is your daily exercise and diet.

Bea and Jes raising their hands on Lowe’s behest, while the Overlord Ching looks on. muhahahah.

That skill, I think, is future-proof. One would be able to see that the skills and experience learned and honed during this period will benefit the new career paths that have opened up recently, namely “Social Media Manager” or “Community Coordinator” ones. Youl will later find out that these jobs will have almost the similar, if not identical, responsibilities. Learning them early on in the gaming industry is a very hige advantage that you’ll ever have, and an advantage in a fast-paced world and environment is a big key in whatever career path you might want to take.

In hindsight, the path that I took may not be a conventional one, and it may be a very wobbly one, but in the end it was a very rewarding one. It made me think, experience and realize a lot of skills, challenges and opportunities that I wouldn’t have if I did differently in the past. It was the less-traveled path, and it rewarded me with a skill set and relationships that would prove to be important and long-lasting in the end.

That is, I believe, and ideal kind of career: a career born out of fulfillment, necessity and opportunity. A career where strong relationships are born out of. A career that allows you to grow even after you have resigned from it.

You can View the full Photo gallery @ the Sakura Index Facebook Page.
With Photos by bluesand0909. Visit her flickr at http://www.flickr.com/photos/blue-sand09/