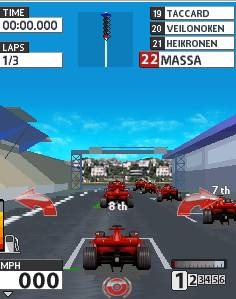 What makes this different: Different driver stats, the need to get to a Pit Stop, “Tire” physics.

So before I begin:

I got utterly bored while waiting for my turn in my Annual Physical Exam. With my Android phone left at home, I was stuck with my old Nokia and a bunch of games. So I had to make the most of it; I had about a hundred load creds anyway that will expire in a few days anyway.

I went up to my carrier’s mobile games website, and tried out and played a few downloads.

So far, I got two: One’s Pacman and the Other’s Ferrari.

Anyway, since I’ve got the time, here’s a short review of these games that you could put in a few bucks into…

There isn’t one, unless you’d think that this game’s story is all about your racing career.

Surprisingly, there are characters for a mobile racing game, differentiated by stats. These are based on real-world Ferarri racers, so if you find one that’s your favorite then get your gear on: 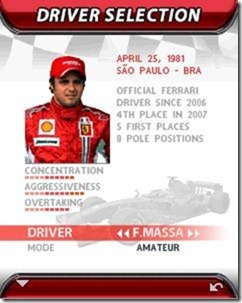 F.Massa was one of the first drivers that I’ve tried, since this is the one that has a fairly high aggressiveness stat. 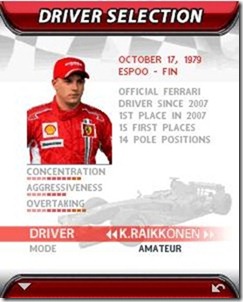 This guy has a high Concentration stat, which would make him react faster in turning the vehicle. Didn’t play him that much, since he has the lowest aggressiveness stat. 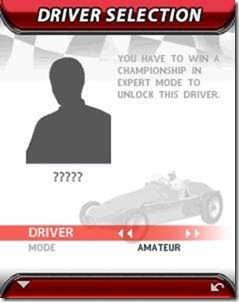 The unknown driver. Well this guy can only be played after you’ve played the championship mode. As for his stats… Well we couldn’t see it from here.

Each of the menus are tailored to look like a part of the Ferrari dashboard with chrome-red finishes, and the menus are pretty much straight-forward, so you won’t get lost here. 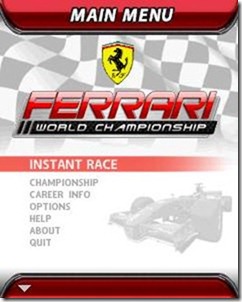 Title Screen. You could go for a quick race if you’re just looking for… quick fun. 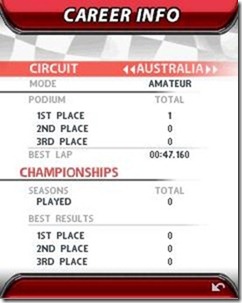 Career info. You could see your stats, and how many times you’ve played overall (yea yea I took this shot when I just played. =)) ) 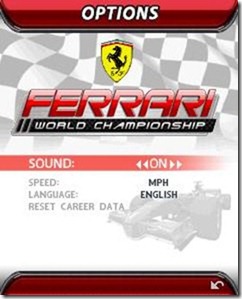 Options screen. You have sound, speed display and language controls. Also you have the option to reset your career score, if you decide to have a second run to it. 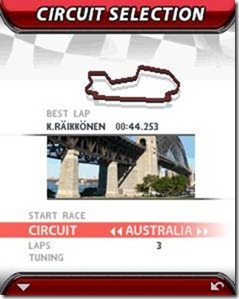 In here you’ll select your race track. You’ll see an overview of the track, as well as set the number of laps.

This is your standard mobile phone racing fare, on which you’ll be able to easily control your car via your keypad. Pretty straightforward with Up, down, left, right and the left and right soft keypads. 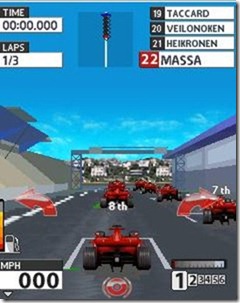 It is presented also in 2D, but with a smooth texture gradient. The background… well you won’t be bothering with them anyway since this is played in a small screen.

Wait.. why are they all in red? Don’t tell me I’m racing against other Ferraris… 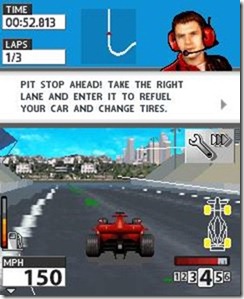 One of the best bits in this game is that you’ll find your car needing to change your tires once you’ve careened off your turns and got them burned too much. You lose traction in your next turns, so better head over to the pit stop once you see the wheel indicator pop up.

Ah and yep you’ve got mission control commenting sometimes on your play, and telling you where and when to get a pitstop– something that’s surprising for a mobile racing game.

The game’s sound is your standard mobile game fare, in full 8-bit goodness. Maybe it’s the retro feel, but it sure does fit the mood.

The game isn’t your standard racing fare, but in 536kb, this game actually fits the bill. If you’re looking for some interesting game that can give a quick fix, then get this.

You can download this game at http://m.smart.com.ph/games. You can also access the site using your phone’s mobile browser.