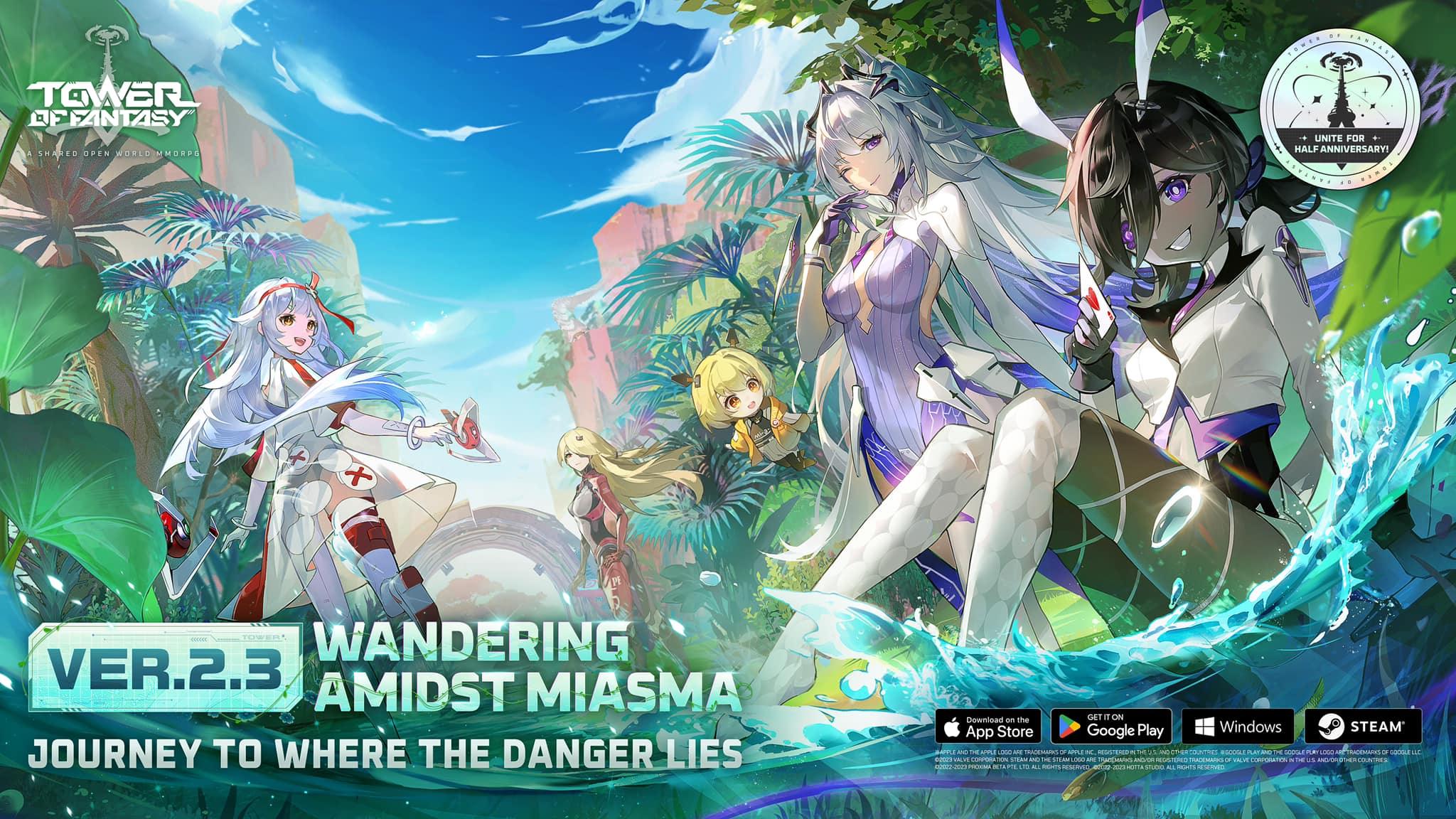 January 18, 2022, Metro Manila Philippines –  Today, publisher Level Infinite and developer Hotta Studio announced details for the upcoming 2.3 Update, Wandering Amidst Miasma, launching on February 2, 2023 in Tower of Fantasy, the hit free to play, open-world MMORPG. Wanderers can expect a new story, a new map including detailed landforms and creatures, new bosses, and new challenges. 2.3 will also celebrate Tower of Fantasy’s six-month anniversary with tons of events and rewards for players, such as nuclei, dark crystals and more. Tower of Fantasy recently won the Best for Tablets award from Google Play, was nominated for Best Mobile Game at The Game Awards, and is available now for free at the official site, as well as on the App Store, Google Play and Steam.

Wander amidst the Miasma

The new map will allow Wanderers to explore the Miasmic Swamp, where Vera’s ecosystem is taken to a whole new level featuring a diverse landscape filled with rock-layered valleys and abundant rainforest-like vegetation. Wanderers who recently finished exploring the vast desert will now have a wholly unique and contrasting experience in the dynamic Miasmic Swamp, rich with new creatures and plant life. While added interactive elements such as the vibrant Neon Mushrooms and mysterious Egg Devices will further enhance exploration in the overworld with their special gameplay and puzzle solving mechanics.

Two new bosses will also be introduced in the 2.3 update. Jormungan utilizes vicious claymore attacks, while Eva unleashes spinning assaults augmented with her primary volt stat. Both of these new bosses have second phases that increase their range of attack and number of lightning hits. And three new instances and challenges will also be added to this latest update. Carnival Party has the Wanderer battling against a band, defending against unique guitar and vocal attacks. In Pursuit of Fate, Wanderers will defeat enemies, while using a racecar to travel to each phase, and finally, Origin of War offers seasonal multiplayer tower climbing gameplay that allows players to mix and match in builds.

February is also a month of festivities for Tower of Fantasy as it celebrates it’s 6th month anniversary! More exciting content will be on the way for players to enjoy, such as events and also rewards. To get updated with the latest Tower of Fantasy news and for more info about the upcoming 6th Month Anniversary activities, be sure to visit the game’s official site or follow the official channels:

Tower of Fantasy is an immersive, sci-fi, free-to-play MMORPG set hundreds of years in the future after humanity has escaped the collapsing environment of earth and fled to the distant planet of Aida. The cross-platform, shared open-world MMORPG action of Tower of Fantasy invites gamers around the world to join in on the thrilling action. Developed by Hotta Studio and published by Level Infinite, the game features an immersive open world, co-operative group and solo adventures, freeform character development, unique simulacrums, and epic combat that allows players to switch weapons and gameplay styles on the fly to unlock their own personal fighting style.