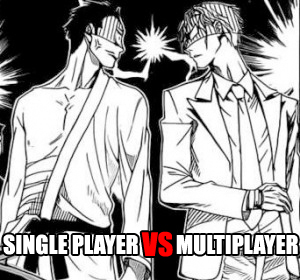 I would like to call out to this discussion I found on LinkedIn, and also on this blog post by Amiquo games. A lot of numbers are thrown out and a lot of PR references were discussed, but I fear that the discussion missed a point: Why do we even play games in the first place.

I would like to share this post with everyone, and also to allow gamers and developers (as well as designers) take part in the discussion, brainstorming and dialogue— with the way it is going, I fear that the rise of multiplayer will be done for the wrong reasons.

Here is my post on the LinkedIn discussion; unedited and in all its notoriety:

Before we raise and begin discussing whether singleplayer and multiplayer games would live or die out, we have to first remember the real reason why we begin playing a game in the first place.

We can all name different reasons, such as the battle system, or over-the-top-visuals, but these reasons only barely scratch the surface. There will always be a primary reason why we play the game in the first place. This is similar to why we go watch a comedy, or even watch a drama. It’s because of that primary reason or human desire that we go and watch or play these games. We watch a Comedy to feel good about ourselves. We go watch a Drama because we want to feel for the characters, feel their emotions and pain. The same thing happens for games– we go play CoD because we want to feel awesome and heroic in a war and kick ass. We go play Final Fantasy because of its involving and interesting story and characters. We go play Mass Effect because we want to save the galaxy. We go play Battlefield because we enjoy the feeling of online team play, as well as kicking some ass using cool guns.

That’s why games are grouped into their own genres: Mass Effect is called an ‘RPG’ even if its gameplay is obviously a Third-Person Shooter. Or why “Dark Souls” is being seen as a Western RPG when it’s made by a Japanese company. Or why titles such as Final Fantasy still has a lot of following with it. Or why people love exploring the world of Elder Scrolls or Kingdoms of Amalur: Reckoning rather than complete the main storyline in one go. The list is endless.

There’s so much single-player games that has to offer which are also on par as what multiplayer games does. Just keep in mind that gamers have different reasons to play or even buy a game; which can include both Single-player AND Multiplayer. It’s all about the design, idea, and the total experience the game has to offer.

This discussion also reminded of Extra Creditz’ episode on JRPGs vs. WRPG; they made a fine point on the games and the reason why we categorize games as such; in the process discuss the underlying reasons why we play a game.

I do hope that we all raise concerns with this one and some noise be made; it seems that innocent-looking discussions like these (especially on LinkedIn) can be a source of data and dialogue between us the market and the execs who have the money to steer the industry.

What do you guys think? Is Multiplayer really going to overtake Singleplayer?