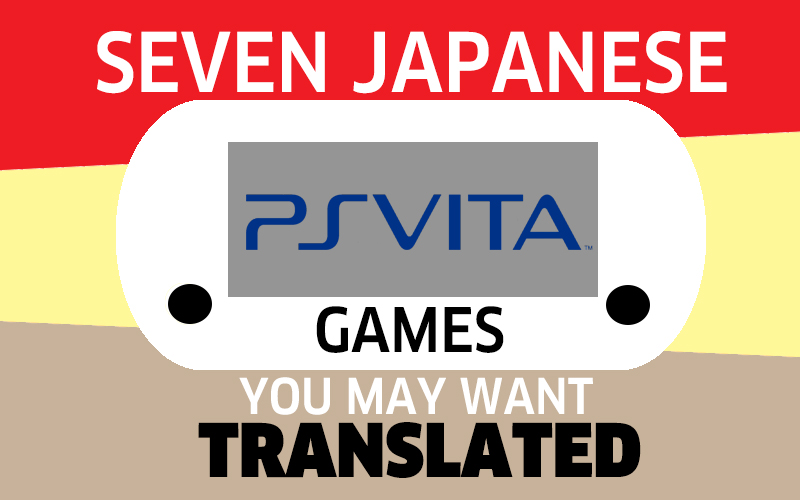 Note: You can check out more Japanese Vita games for 2014 in our newest article! Read HERE to know more!

Japan has slowly been turning its games into something portable-friendly, since majority of its consumers do not stay at the comfort of their homes to play all day. Thus, consoles such as the Nintendo DS, 3DS, PSP or PS VITA has become their gaming weapon of choice.

When I first got my hands on my own PlayStation VITA, one of the things I earnestly looked forward to were JRPGs or visual novels from Japan. I personally prefer them over most western games, perhaps because of their gameplay, plot and character designs. Unfortunately for me (and perhaps other JRPG lovers out there), a lot of them do not have a North American or European release yet. I am not as fully knowledgeable as the others, but here’s seven of the Japanese PS VITA games most players wish to be translated.

Ever been a fan of Phantasy Star games? We’ve seen most of its titles becoming great hits not only in Japan, but also to the rest of the world, particularly with westerners. The PC version for Phantasy Star Online 2 has been released in Japan last year, and now, the game is more accessible as it moves to the PlayStation VITA platform. As a lot of Japanese prefer portable gaming, this has been great news to its PSO2 fans. I, for one, would love to access the game anywhere I go. However, as this game will be released in Japan on March, along with the fact that the PC version itself doesn’t have a live English server yet, it seems hardcore fans will have to wait longer for this to be released in English as well.

One of Key’s masterpieces is currently being animated by JC Staff for this season, and the timing couldn’t be any better. Slated for release on this year’s March, Little Busters’ viewers can enjoy and appreciate the story behind each character more, at the palm of their hand with the game having its own version on PS Vita.  Looking at the trailer, it seems that the routes for Ecstacy version are also included.

Most Steins;Gates fans (or at least, the hardcore ones) know that the successful 5pb sci-fi visual novel has been converted across different platforms over the past years (Windows, PSP, iOS & PlayStation 3), and it doesn’t just stop there. A PS Vita version of the original game is also scheduled to be released on March this year, along with a fan disc entitled, Steins;Gate: Hiyoku Renri no Darling. The sequel is less serious and more light-hearted, and could be considered a romantic comedy spin-off of the game. Hiyoku Renri no Darling is also available for PlayStation 3 and PlayStation Portable.

As this popular rhythm game is now available overseas, some people don’t really see the need for the game to be translated anymore. Although, it’ll be a good thing if users can actually read the UI. Knowing that the previous Project Diva games never had translated versions, people believe Project Diva f will be sharing the same fate. Then again, it’ll be awkward if even the songs get translated to English (I know it’s not just me).

Atelier Totori Plus: Adventure of Arland

It’s basically Aterlier Totori from PlayStation 3, along with new costumes, recipes, CG art and a dungeon from Atelier Rorona (Orthogalaxen challenge dungeon). The VITA version makes use of front and rear touch screen controls, along with the analog stick for easier navigation for the cutscenes, etc. As the PS3 version had its English translation released, fans are eagerly anticipating for its counterpart in VITA too. I mean, who wouldn’t want to see Totori even outside your home, right? Right?

Kadokawa Games brings the all-time Type-Moon favorite, Fate/stay Night to PS VITA. There isn’t much difference with the PC version, except for the touch controls plus the new opening sequence, which was animated by ufotable (same animators behind the Fate/Zero anime series). With that said, PC users might want to skip getting this, unless you want to play the additional card game feature, but if you haven’t, then having it on English might be one of the things you wish to happen.

A remake of Namco’s eleventh game Tales RPG franchise. I personally haven’t tried any Tales game before, but I’ve been hearing good things about it for a while. Innocence R has improved graphics (a full 3D battle sytem), as well as new and more detailed character designs, and  a revised character growth concept. The game will be released in Japan on March (notice that a lot of JP VITA games will be released in March). No news about any North American or European release has been given as of late.

Do you agree with the list, or are there other VITA games that you think deserves the attention of English gamers? Leave a comment below, and share your opinions with us!