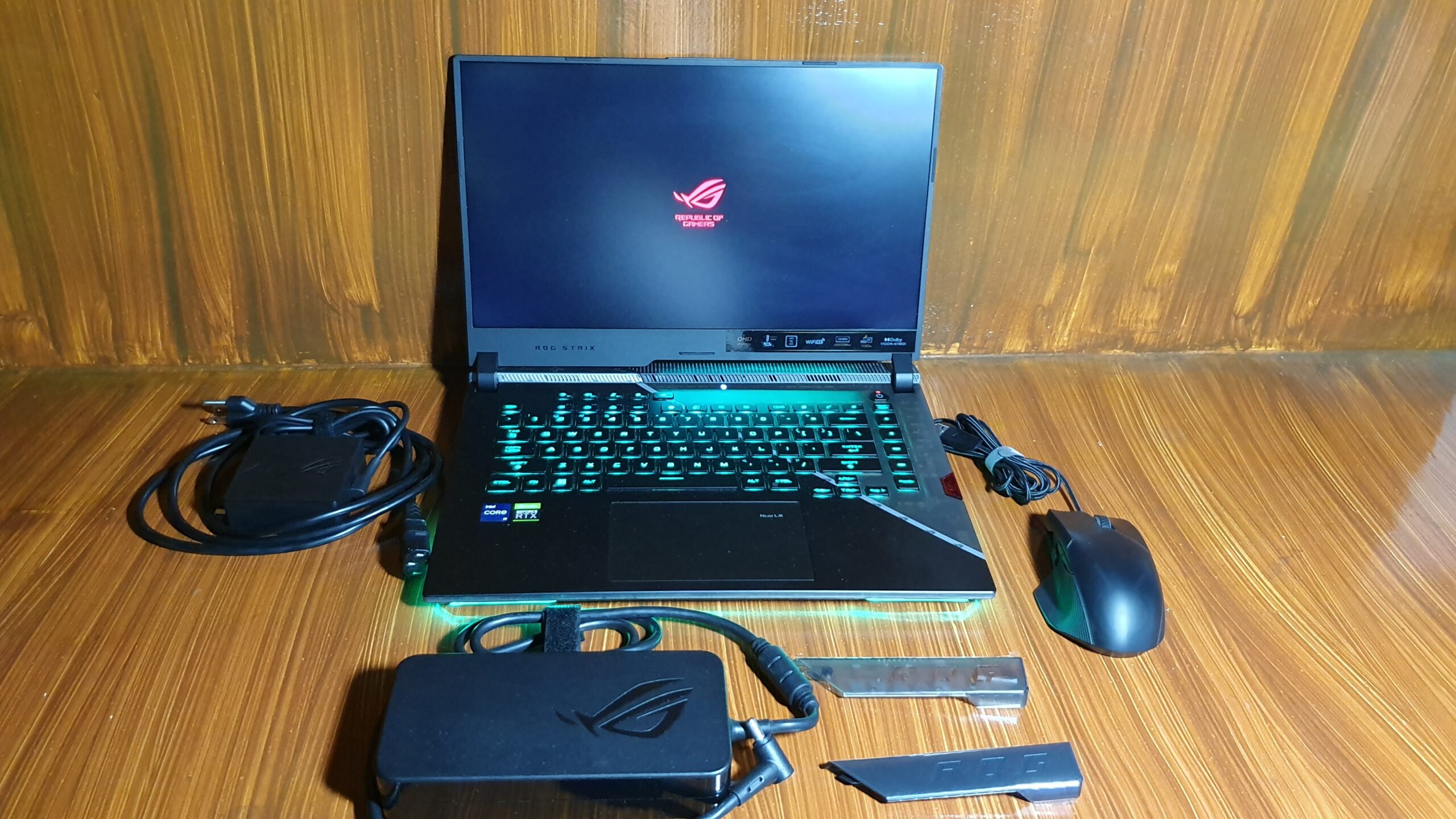 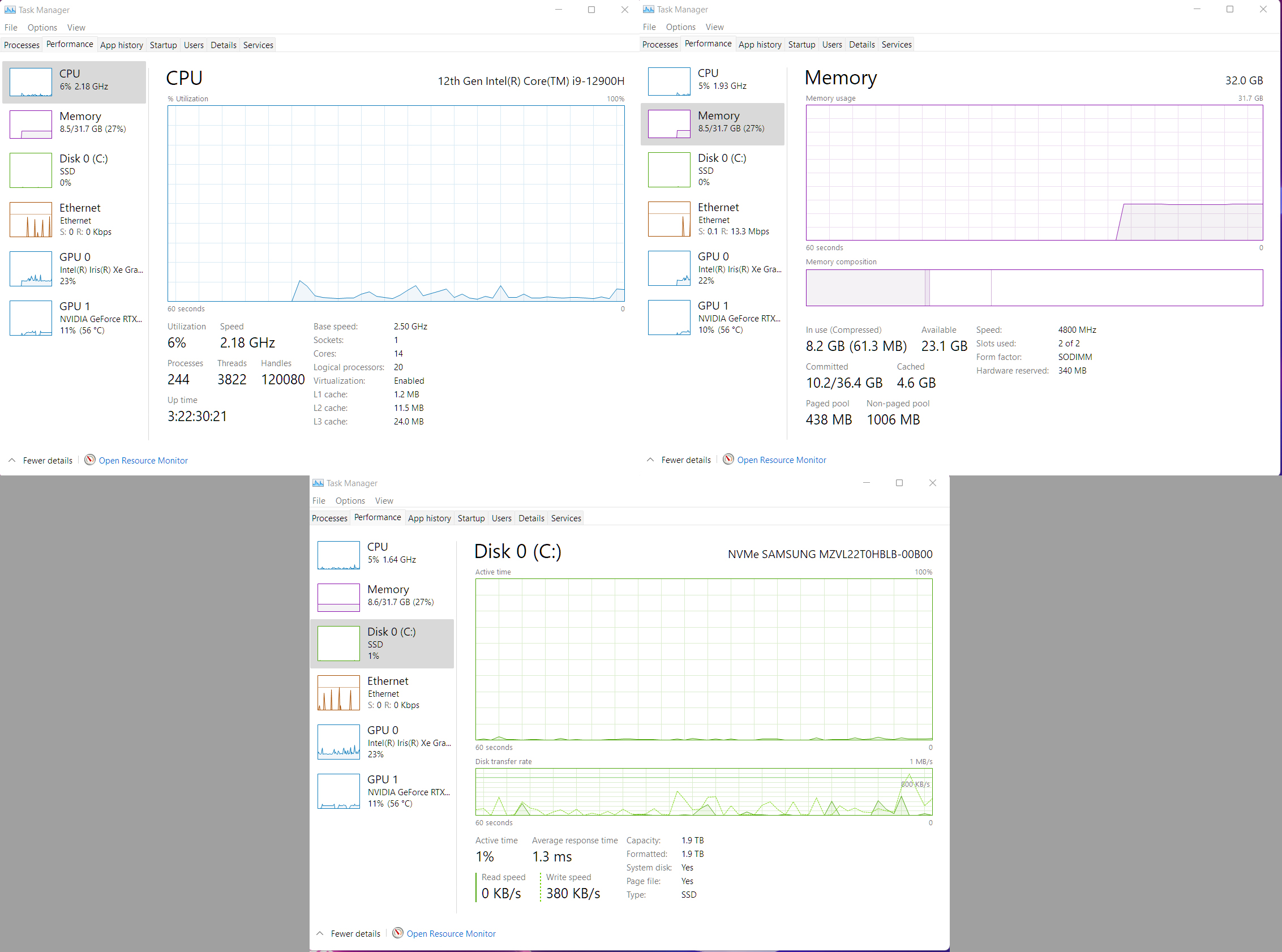 The laptop packs an ASUS G533ZW motherboard with an Alder Lake chipset, while its integrated graphics card uses the Intel Iris Xe Graphics with 1GB memory. 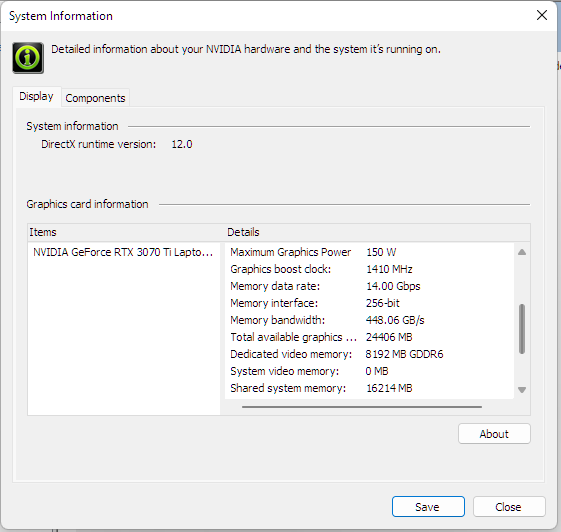 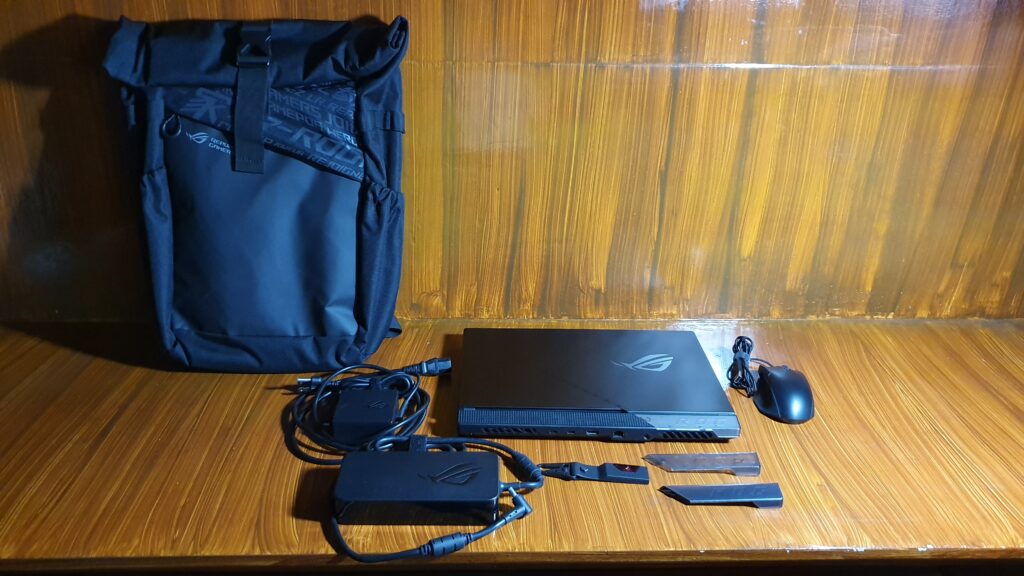 The package is simple and straightforward: The ROG Strix Scar 15 G533 laptop, a brick-type charger, the Chakram Core gaming mouse, and the ROG-themed backpack. Other accessories include the smaller travel charger with USB-C, the ROG Keystone and extra armor caps for the laptop.

The Scar 15 comes with the standard sleek black finish and the signature metallic eye logo that the ASUS ROG branding is known for. The base of the laptop also has LED lights with RGB lighting settings which can be customized via the Armory Crate app’s AuraSync function.

Starting from the left side, there are 2 USB ports and a 3.5mm headphone jack. The right side has a port for the ROG Keystone attachment and a vent. On the back, you have ports for the charger, the LAN cable, HMDI and USB-C. The underside is also vented to allow for air circulation and features rubber grips to secure the laptop in place while gaming. 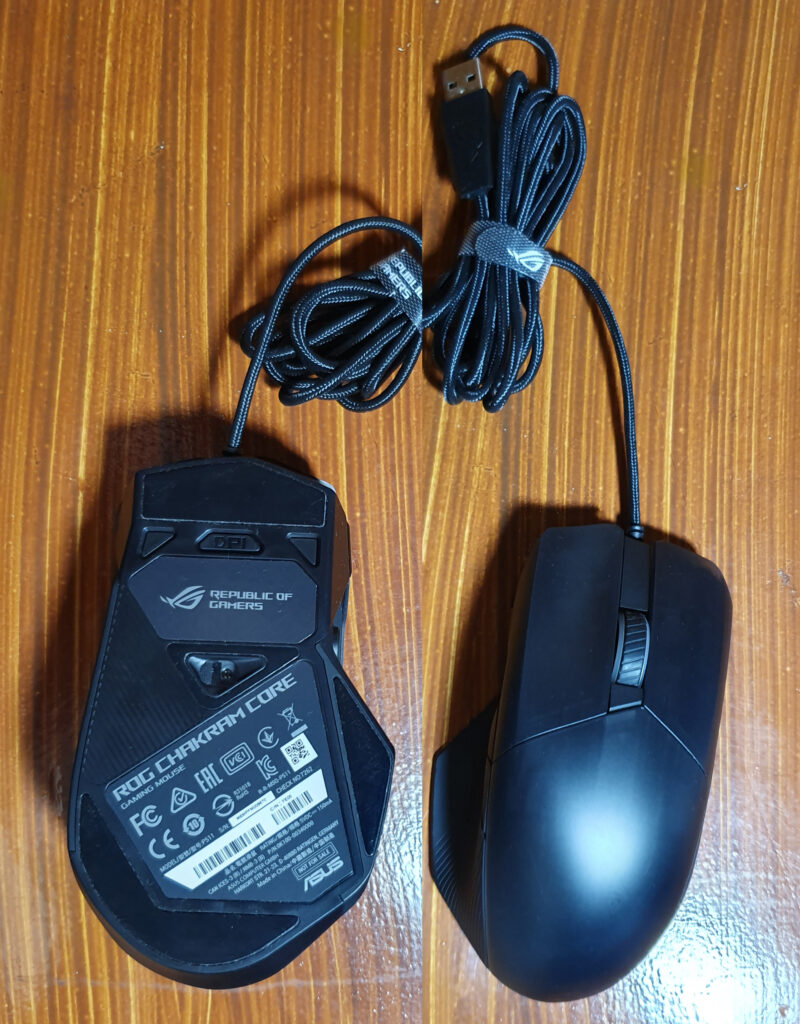 The included ROG Chakram Core gaming mouse comes with variable sensitivity settings which can be configured in the Armory Crate app. Users can also change the grip plates and weights to their liking (sold separately). 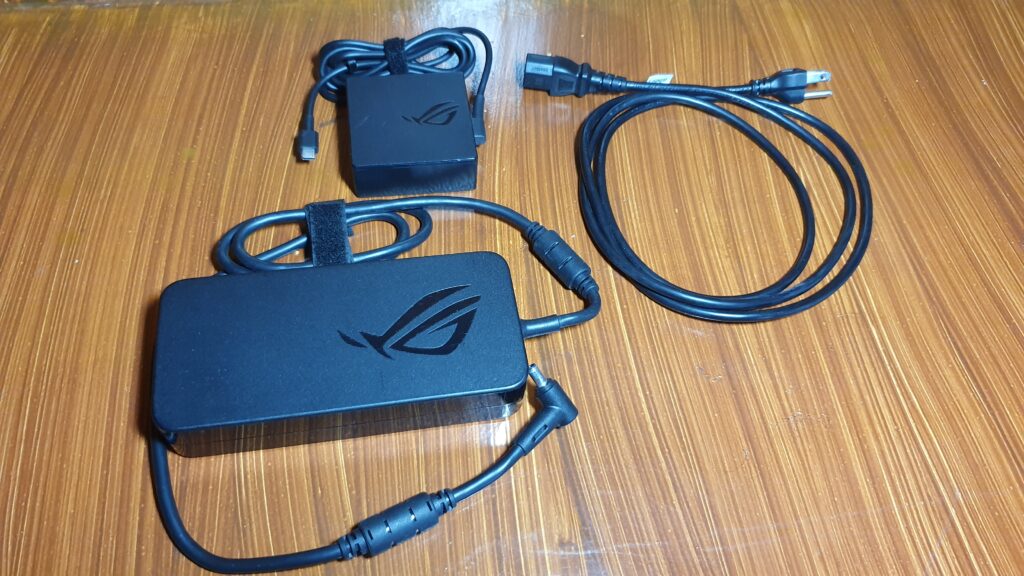 The package includes a 240W power brick charger and a smaller travel charger with a USB-C port for when you need to game on the go. 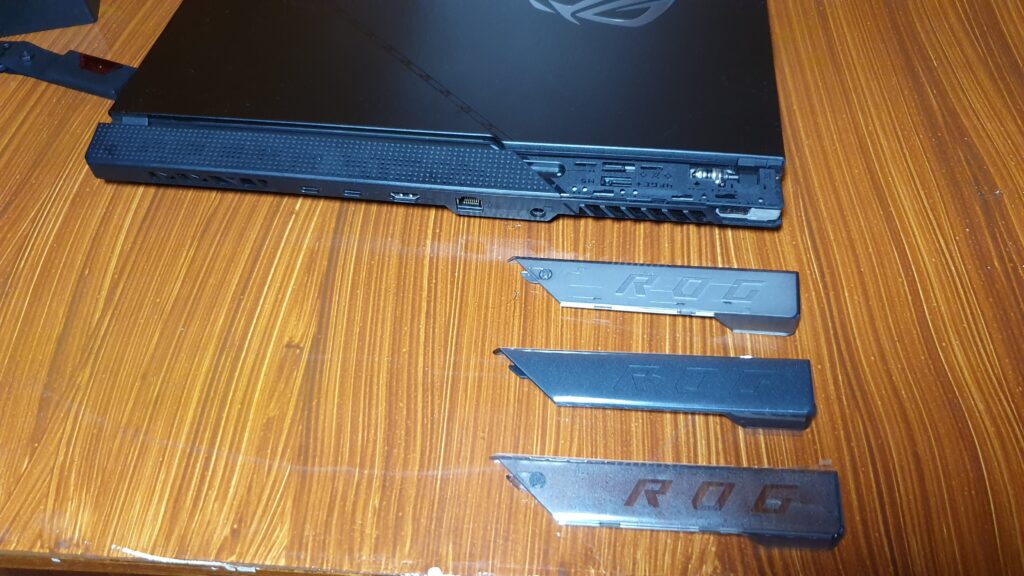 If you’re looking to customize your laptop, there are 2 extra armor caps that can be switched out with the default one. All you need to do is slide it out and slap in a new one.

Setting up the laptop 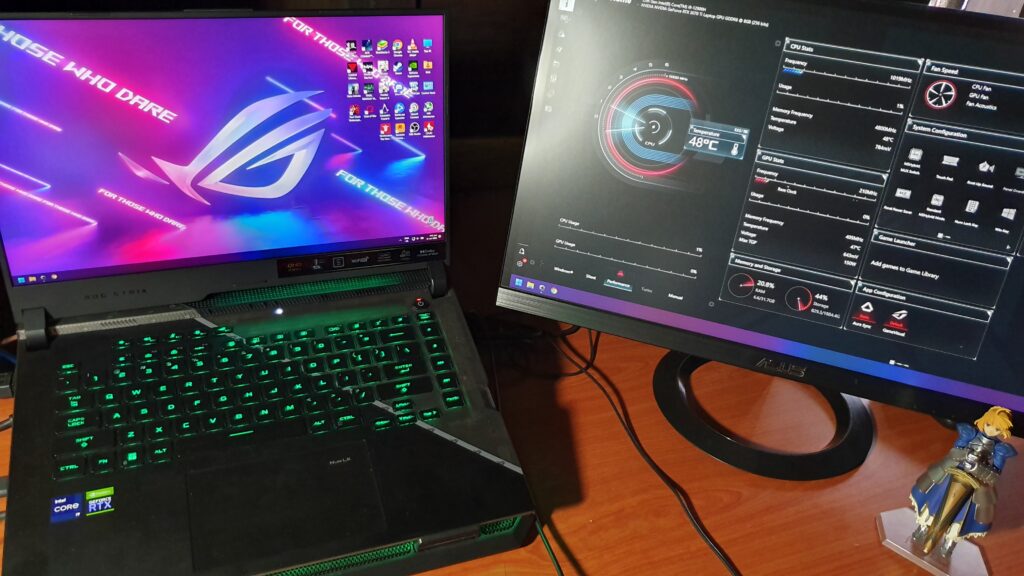 The laptop comes with a default ASUS ROG color profile. Though the colors appear vivid, I did feel like the display felt too warm, which required a few adjustments in the Calibrate Display Color option from the Control Panel. 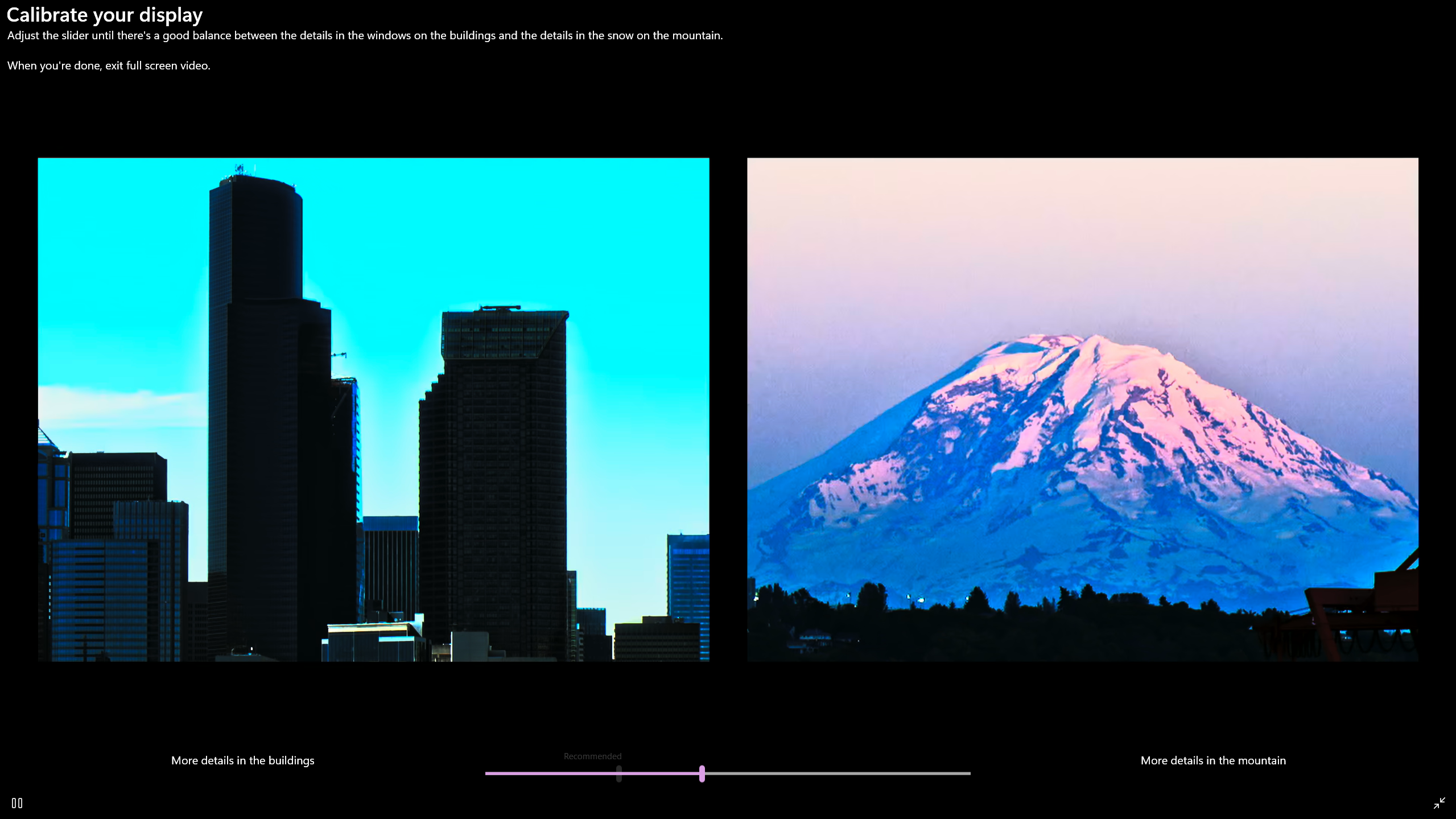 First thing to do was adjust the HRD toning. Once that was done, the next step was adjusting the gamma level and the color bars as well.

Do keep in mind that adjusting the color is entirely up to your personal tastes. For me, it was mostly a matter of reducing the warm colors on the screen, which meant moving back the red and green slider bars, with the blue color adjustment slightly further back than the other 2. 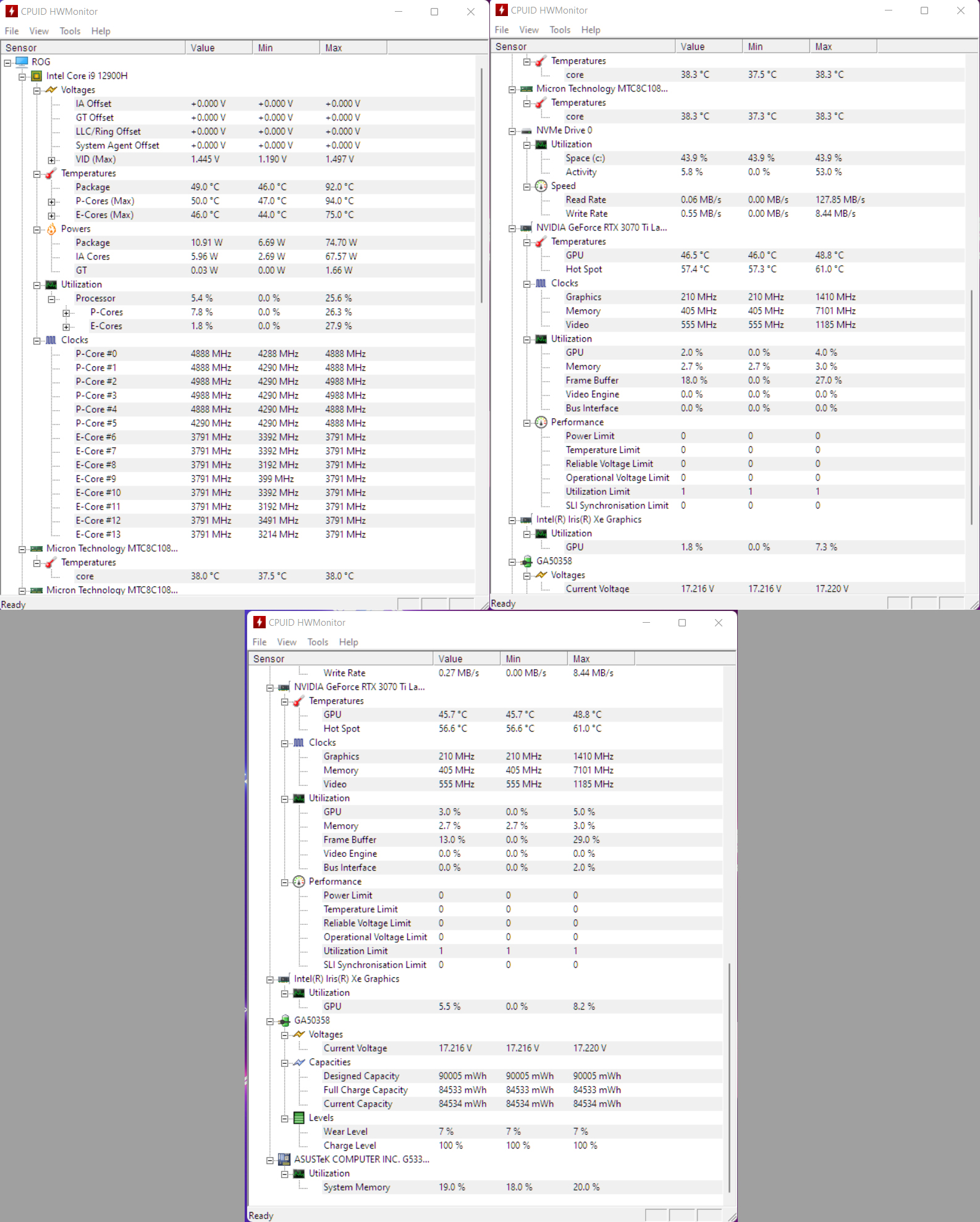 Immediately after booting the laptop, startup temperature for the i9 CPU was at 49 degrees Celsius (120.2 degrees Fahrenheit), with the Nvidia GPU not far behind at 46.5C (115.7F). 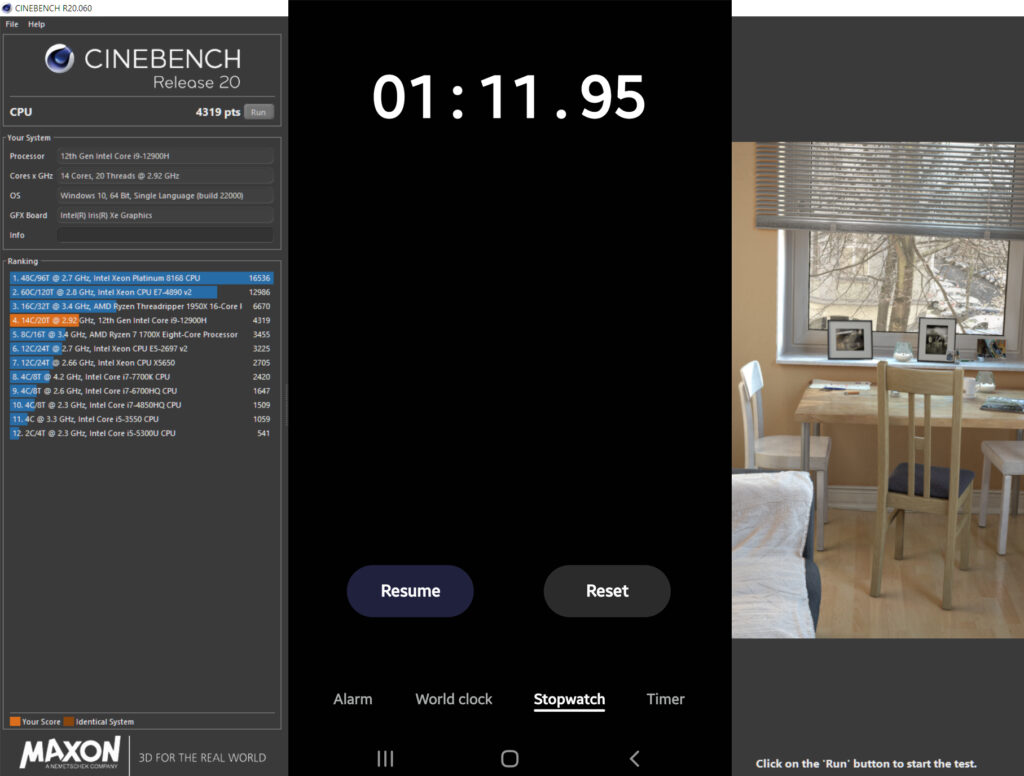 Cinebench results pegged the laptop’s score at 4319, taking a total of 1 minute and 11.95 seconds to completely render the image.

Apart from gaming, there was still the matter of everyday use for this laptop. Simple things like customizability, battery life and volume level were aspects that I also checked.

The Asus ROG Strix Scar G533 runs on a Windows 11 OS. As of this writing, I’ve noticed that certain customization options were lacking, most notably the option to put the taskbar’s position on top of the screen instead of the bottom. The only thing present was the icon and Start Menu button alignment option.

While this sounds almost nitpicky, being able to move the taskbar around was something the previous versions of Windows always had. If you’re one of those people that prefer to keep the taskbar anywhere but the bottom, this personally felt like a rather disappointing move. 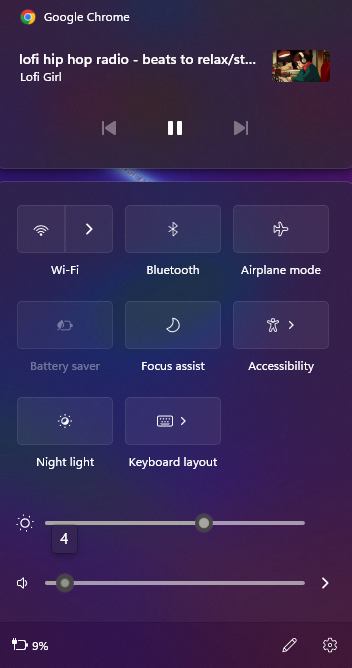 In terms of the volume level and quality, the laptop makes full use of its Dolby Atmos technology by delivering a loud sound experience through headphones alone. Even with standard earbud-type headphones, I barely needed to adjust the volume past single-digit levels. Not only is this a great feature for gaming, but it made listening to everyday lo-fi hip hop and watching movies that much better. It lets me hear every detail in movies, music and gaming environments without adjusting the volume too high. 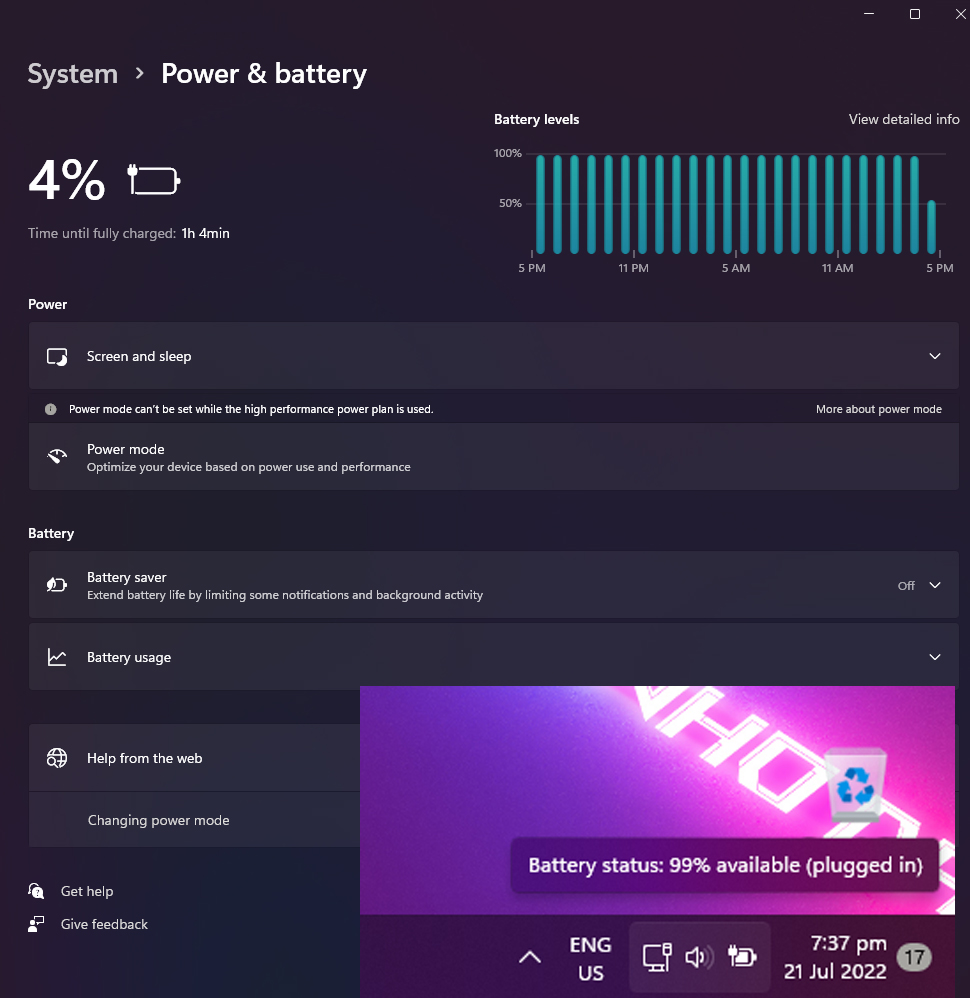 Battery life and charging times were also impressive for this model. The Scar 15 uses a 90Wh battery, which takes at least 1 hour and 40 minutes to charge from 4% to 99% using the supplied 240W charger. Even then, it took at least 30 minutes more to completely reach 100%. Not too bad, considering previous models took at least 2.5 hours to completely charge from 0 to full.

While gaming does slow down to 30 FPS while unplugged, I was able to play for at least 1 hour and 30 minutes. This was after adjusting the NVIDIA Battery Boost settings to maximize performance even while unplugged.

Disclaimer: All games were played at room temperature of 32 degrees Celsius (89.6 degrees Fahrenheit) due to Southeast Asian climate conditions. Thermal performance may vary depending on your location.

Laptop thermals have always been an issue, given that the cooling usually relies on thermal pipes and liquid metal. While near-constant 90C (194F) temperatures were the big issue during this test, the good thing was that the heat was barely felt on the laptop’s surfaces.

While it was a joy to see both the interior of the Banished battleship Gbraakon and the environment of the Zeta Halo in all its glory, there were 2 major issues I noticed with Halo Infinite: the abundance of shadows and high thermals.

For most of the time, the game was too dark due to the excess shadows, especially during the battleship segment. I either had to use the helmet light or adjust for near-maximum in-game brightness just to make the game environment visible. Even then, areas with direct sunlight became almost blinding to look at. 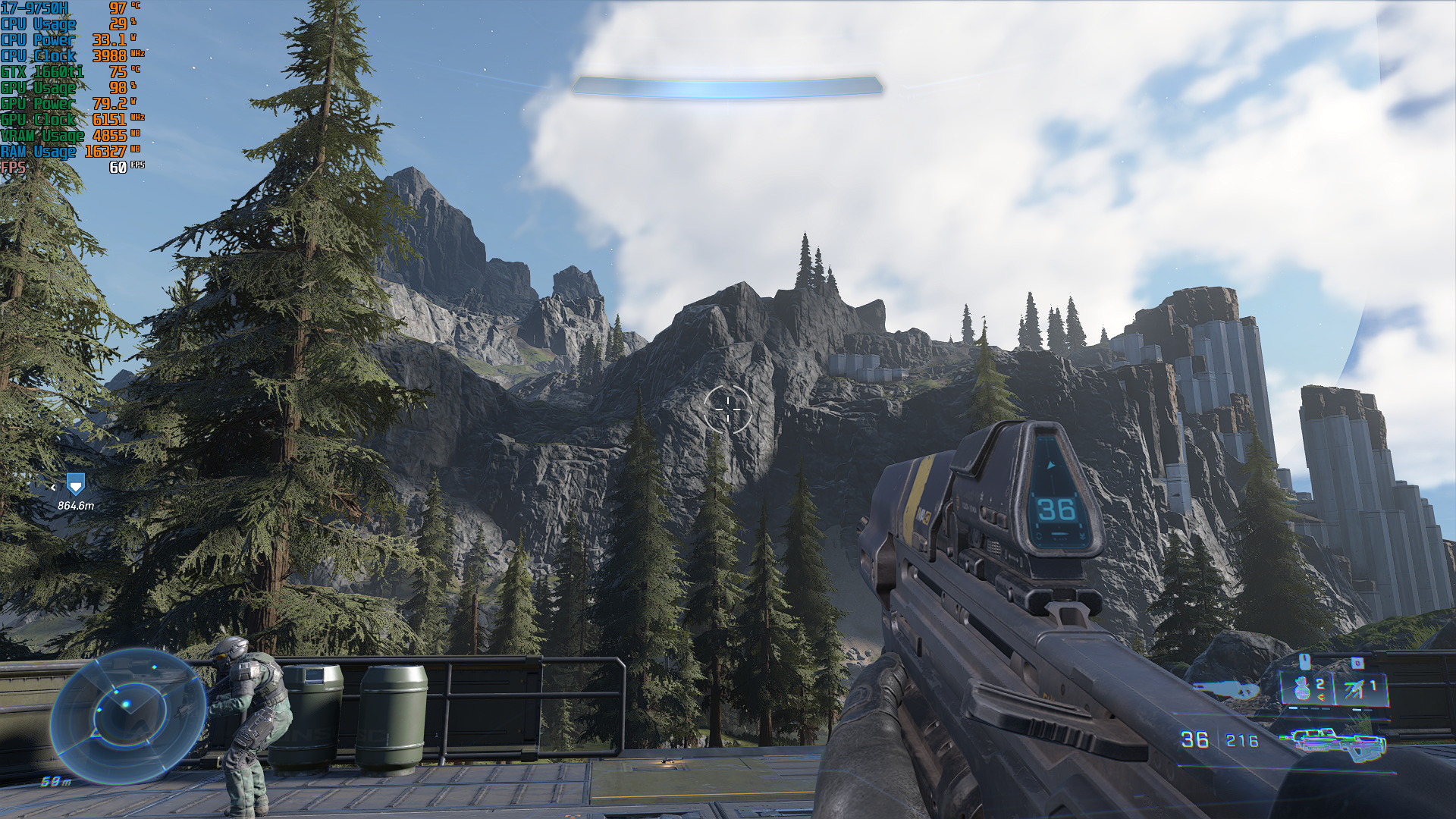 In contrast, playing this game on a GTX 1660 Ti-equipped laptop appeared more balanced shadows and lighting compared to playing it on the RTX 3070 Ti.

Thermal performance was another issue as well. During the playthrough, I observed near-constant 90C (194F) internal temperatures, with spikes going over 95C (203F) during combat. Thankfully, I barely felt the heat on my hands when they were on the keyboard.

In contrast to Halo Infinite, Modern Warfare 2019 had far better balance when rendering dark areas. This was apparent in the single-player mission The Embassy, which takes place at night and required the player to use illumination flares to fend off waves of attackers. Despite the dim lighting during most of the fights, I was able to clearly make out where the enemies were and took them down with little difficulty.

RDR2 was something I was looking forward to trying on the Scar 15. After all, there was a lot of environmental detail that could put this GPU through its paces, and rightly so. The only problem was that the game kept plummeting down to 1 frame-per-second whenever I tried to adjust the graphics settings. This was not the laptop’s fault, but a known issue with the game’s PC version. 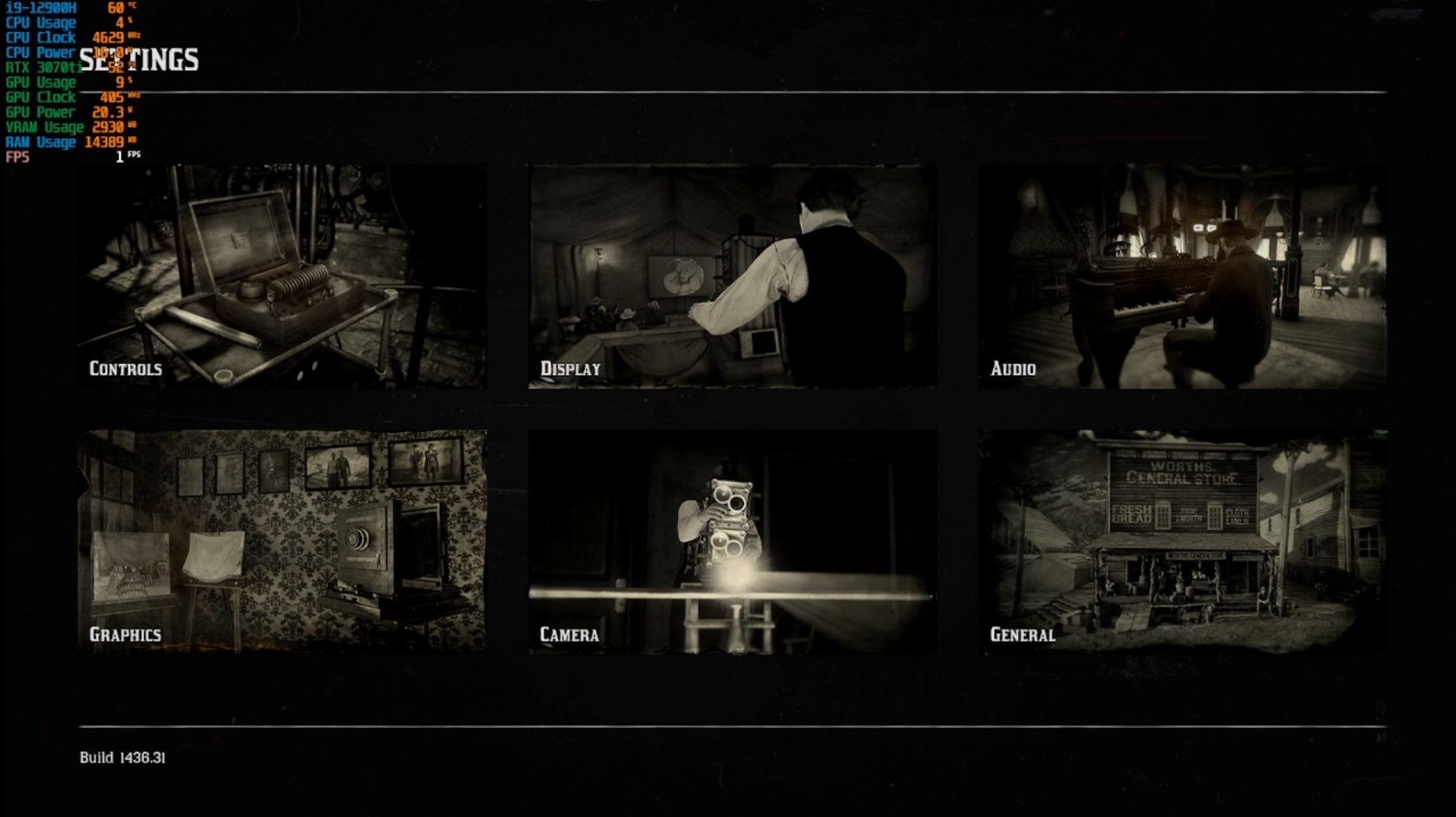 Adjusting and saving the graphics settings led to the framerate dropping to 1 FPS.

During the one session where I finally managed to get it to run, I still noticed near-constant 90C to 95C (194F to 203F) temperatures. Even so, the environmental detail on medium graphics was enough to make it an enjoyable experience.

While it was tempting to max out the graphics settings on ultra, it would risk even higher temperatures than already recorded. That and more game slowdowns.

FFVII Remake’s PC version was a joy to play on the ROG laptop, especially with a PS4 controller attached.

Unlike the first 2 games, the thermals on FFVIIR weren’t as bad as I anticipated. For the most part, temperatures mostly stayed in the 76C to 85C (168.8F to 185F) range. Though during the boss battle with the Scorpion Sentinel, I’ve noticed a couple of spikes at 96C (204.8F) and a slight fluctuation to 61FPS. Other than that, the gameplay was smooth and framerates were almost always locked at 60 FPS.

The game also comes with HRD and SDR options where you can set it for more vibrant console-like colors, or a more movie-like color setting.

Genshin Impact’s world of Teyvat is one of the most colorful videogame environments to explore. With scenic environments and cities inspired by different cultures in the real world. This makes it a great choice for the RTX graphics card and the ASUS ROG color profile. Though initially, the in-game colors were too warm, I addressed that by adjusting the colors with the NVIDIA filter to further refine the game’s scenery.

The results were breathtaking. The locations I visited included the Raiden Shogun’s castle, the Narukami Shrine and the Jade Chamber. All of them were shown both with and without the filter for comparison. 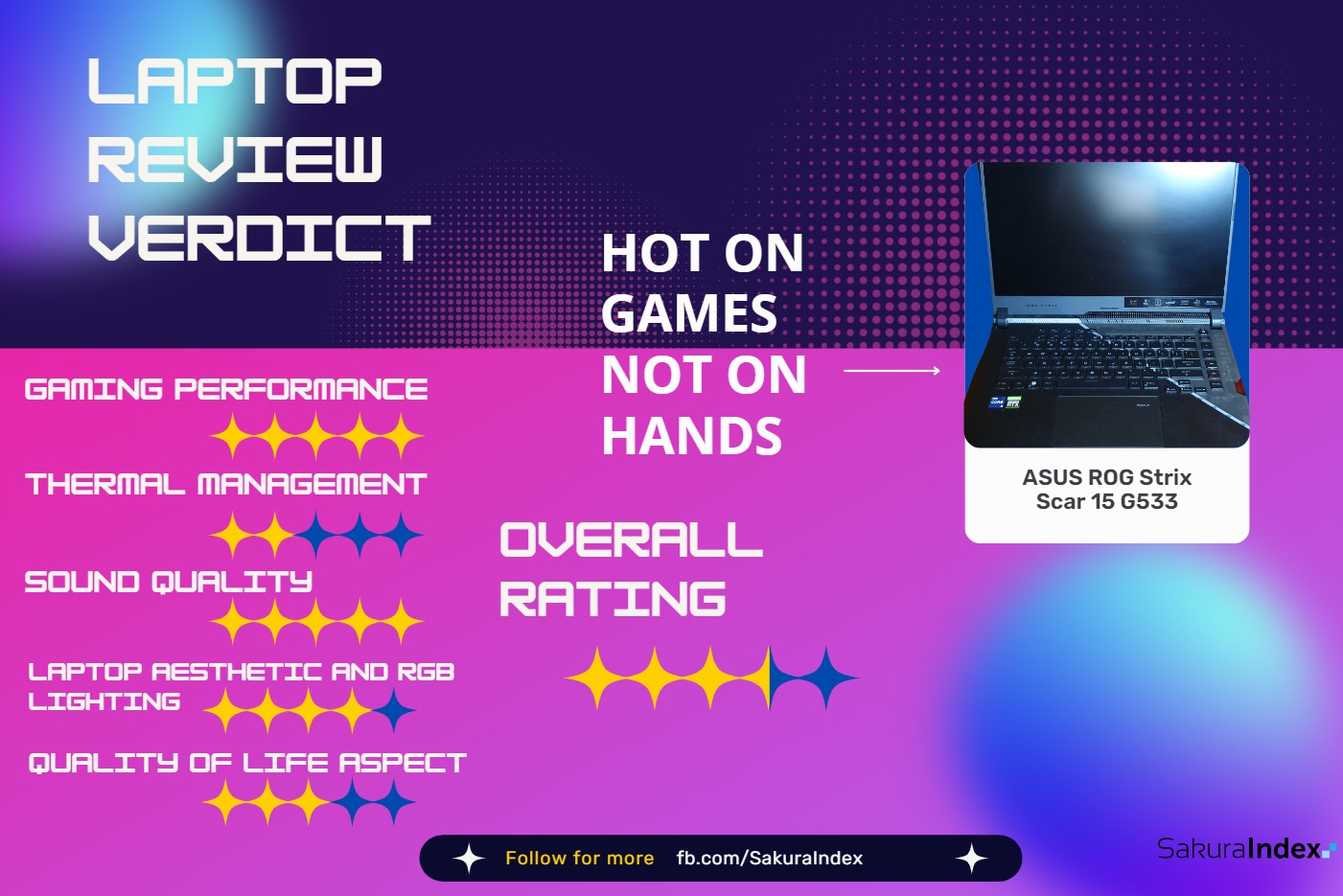 The ASUS ROG Strix Scar 15 G533 is an impressive piece of hardware. The only problem that stopped me from maxing out the graphics settings was the risk of higher temperatures than what I ended up with, which is typical for most gaming laptops.

The bright side is that while I ended up with temperature readings above 95C (203F) at times, I barely felt the heat when my hands were on the laptop’s surfaces. This was true even when playing at warm room temperatures, which were still well within the laptop’s operating range. Playing in airconditioned rooms and using a cooling fan pad would still be the way to go for devices like these.

Its package is also a straightforward one, letting you game right off the bat. The only caveat I found inconvenient was the limited customization options of Windows 11, which I hope Microsoft will add in a later patch.

So, now we come to the question: Is this laptop worth getting? If you’re a fan of the classic Intel/NVIDIA combo and are looking for a no-frills gaming package, this is the laptop for you.

The ASUS ROG Strix Scar is available in the Philippines at an SRP of PHP 179,995, which you can get on this link. You can also get it as part of the ASUS/ROG Cool for School 2022 Promo, where you can also grab the ROG Hoodie, ROG Falchion Wireless Mechanical Gaming Keyboard, and an ASUS C3 Webcam as part of the deal!