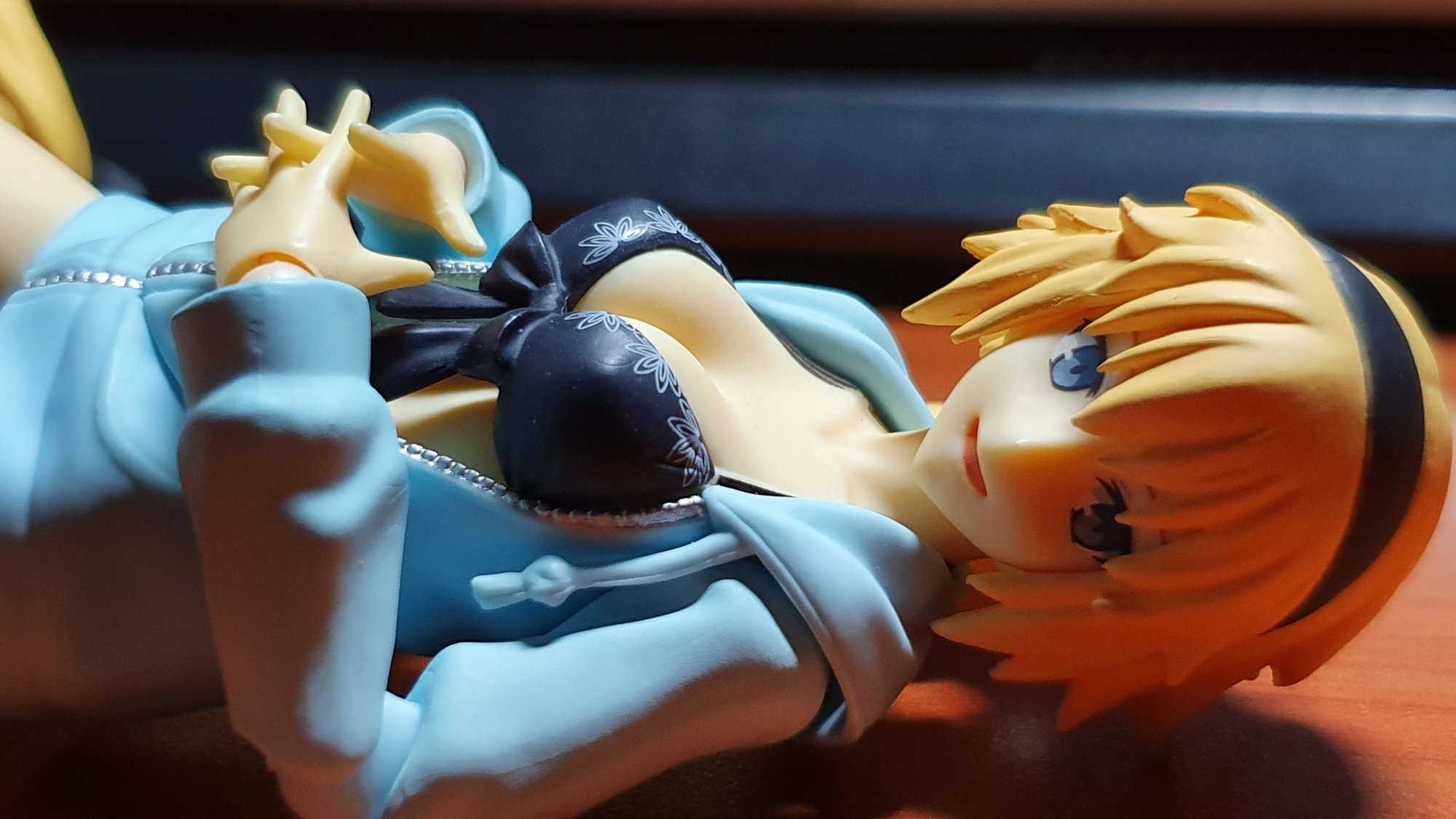 Mobile game Fate Grand Order’s Summer Version Archer Jeanne d’Arc Figma is now available from Good Smile Company. In this review, we’ll check out what comes in the box and just how poseable she can be. It’s a worthy addition to the FGO Figma line, and one that stays faithful to the in-game source material. 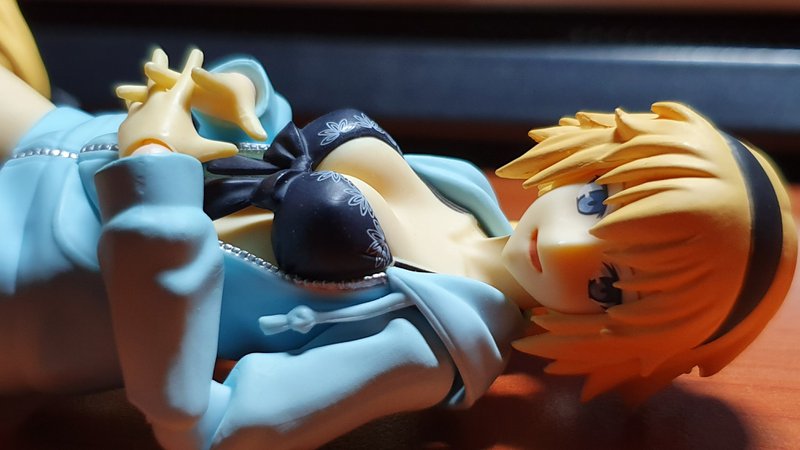 Out of the Box

The box is decorated in the signature light teal color of the character’s outfit. It also lists some of the available poses that you can do with this Figma. 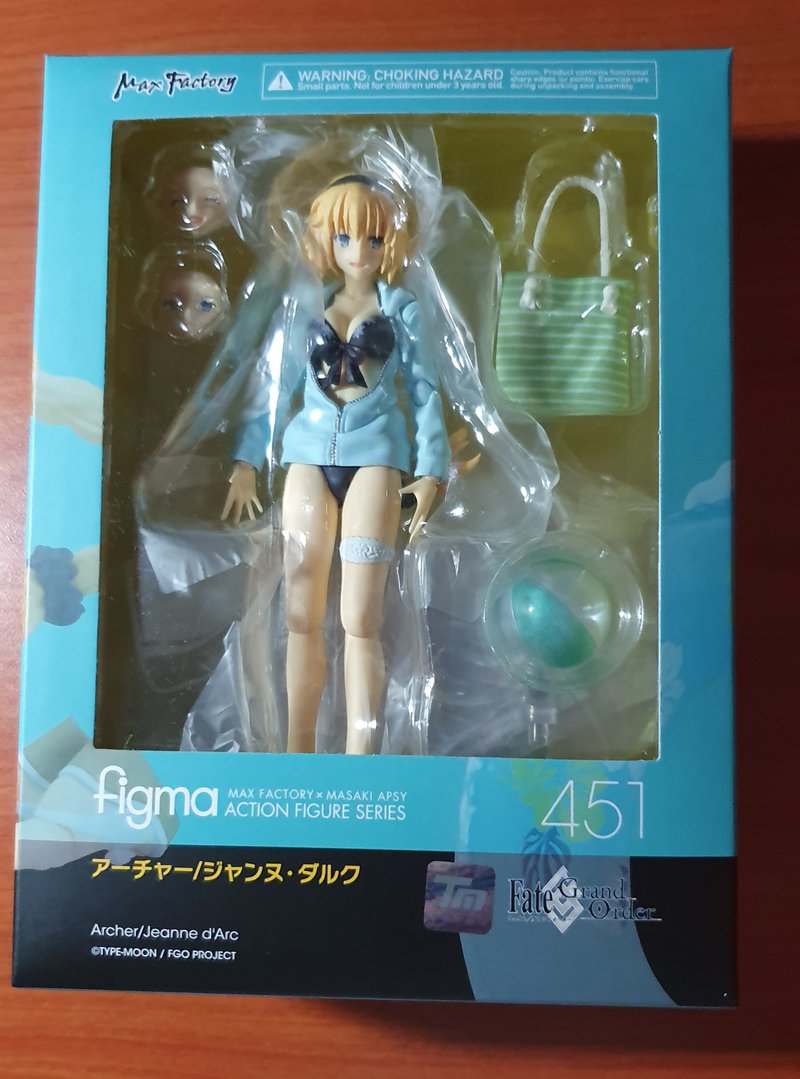 Front view of the box. 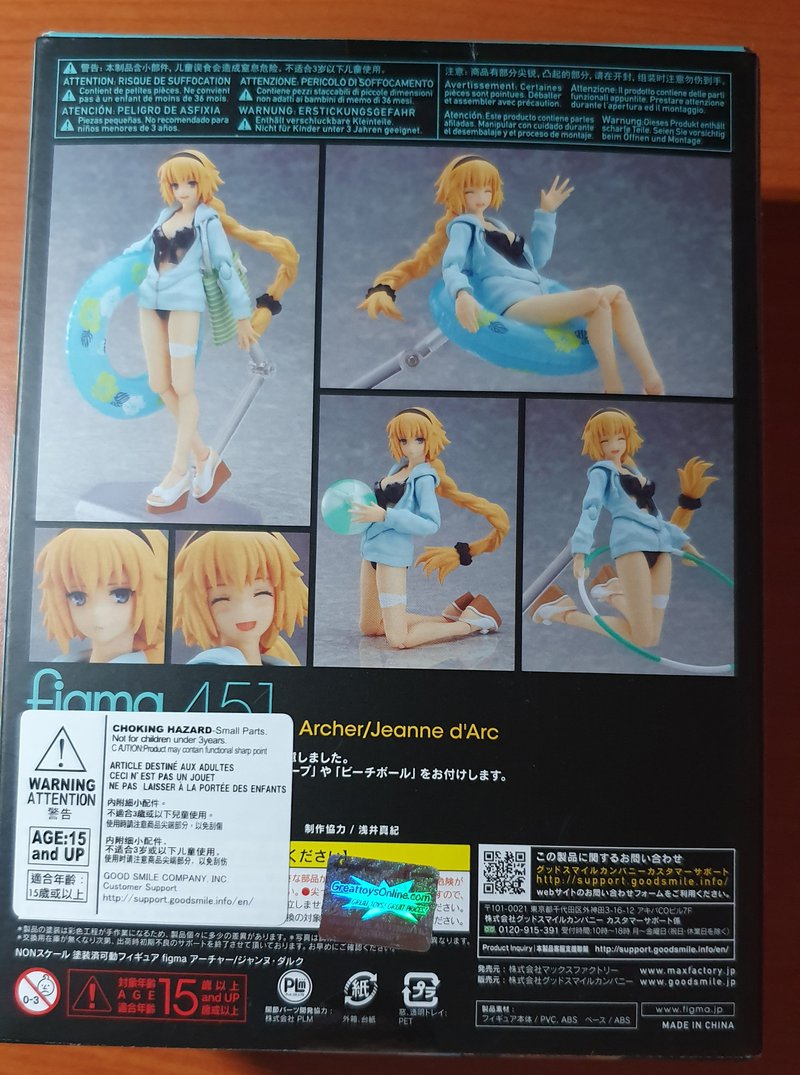 Rear view with all attachments.

Contents include the Jeanne d’Arc Figma itself, 2 extra faceplates, a beach ball, handbag, a hula hoop, floater ring, 8 extra hands with a spare joint, the Figma storage bag and the base stand with an adaptor attachment. 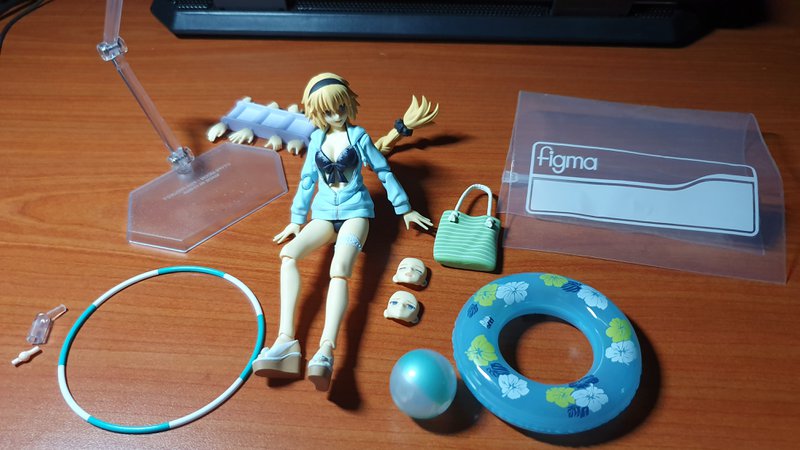 The Summer Version Archer Jeanne d’Arc Figma is a faithful recreation of the in-game character’s initial form. The figure stands at approximately 5.9 inches tall, and aside from the skin and hair, the outfit and details on the faceplates are painted on. 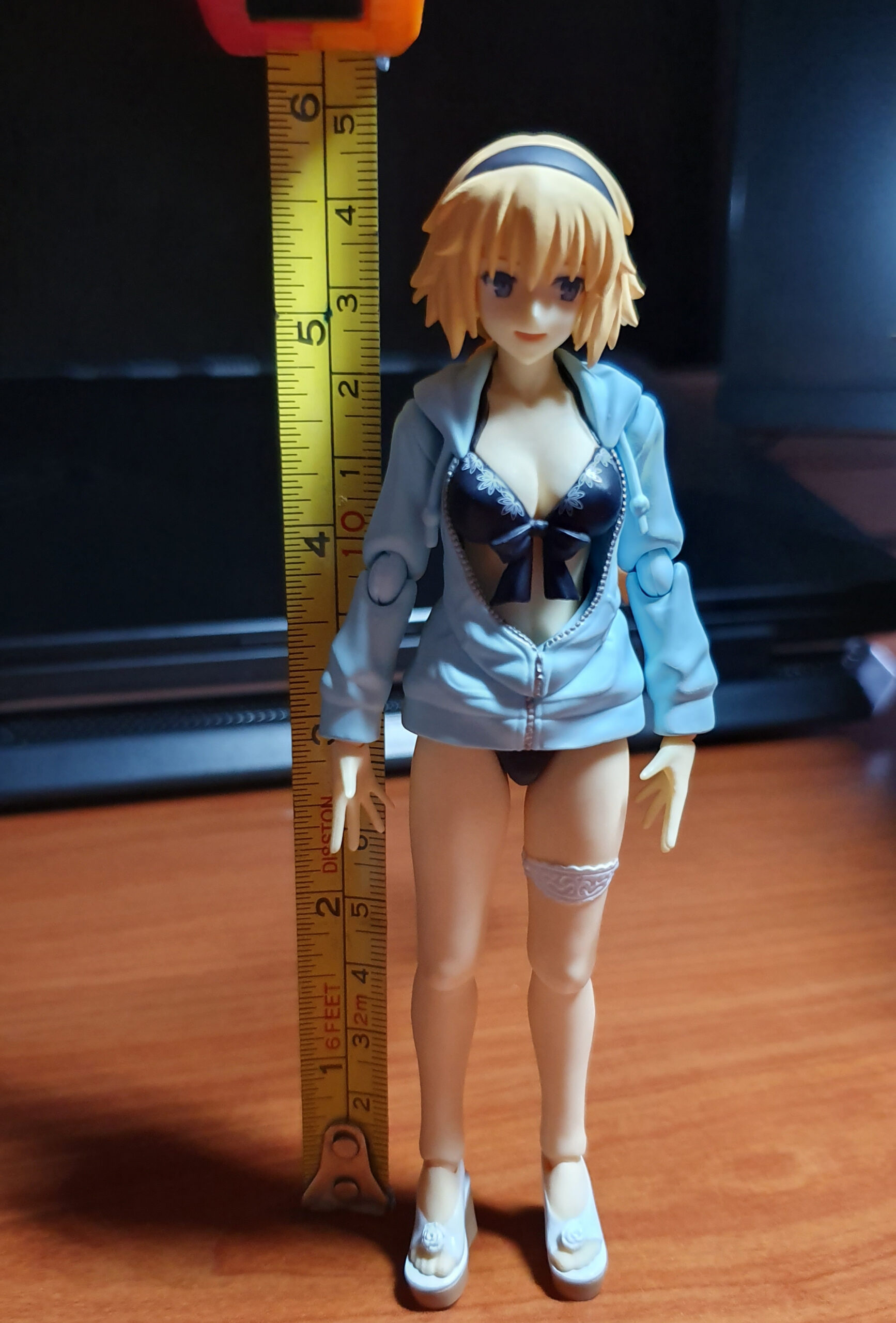 The hairstyle can be rather spiky to hold, so it’s best to handle it with care, especially when changing faceplates. One noticeable issue I’ve seen is that the hair’s frontpiece does have some mold lines that can be seen up close. 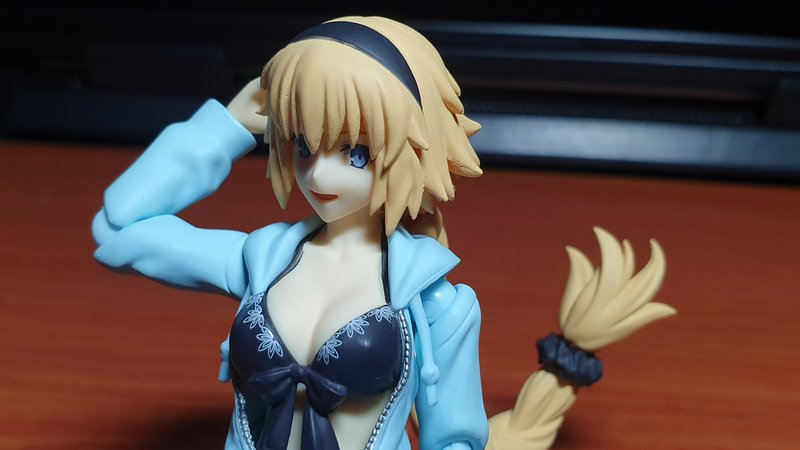 Yes, there’s some noticeable mold lines on the hair, but she still looks beautiful.

For the outfit, she’s dressed in a light teal beach parka that’s unzipped to show the black bikini with a flower-like trim design underneath. Instead of her signature headgear in her default Ruler form, the summer Archer form trades it with a simple black headband. There’s even the garter on the left thigh and her beach slippers with a white rose design. For the extra faceplates, the box contains the eyes open sad pout and the closed eyes smiling blush expressions. The connectors on the head are also compatible with faceplates from previous Figmas with the same hardpoints. 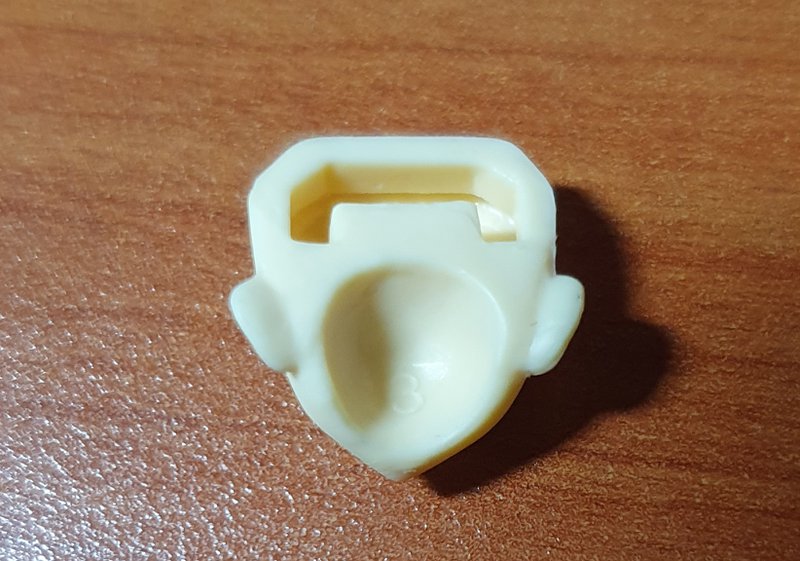 It’s compatible with faceplates from other Figma too.

Her shoulder and arm joints have an extending gimmick to add to the poseability. You can pull the hip joint downwards, and the shoulder joints outward as well. 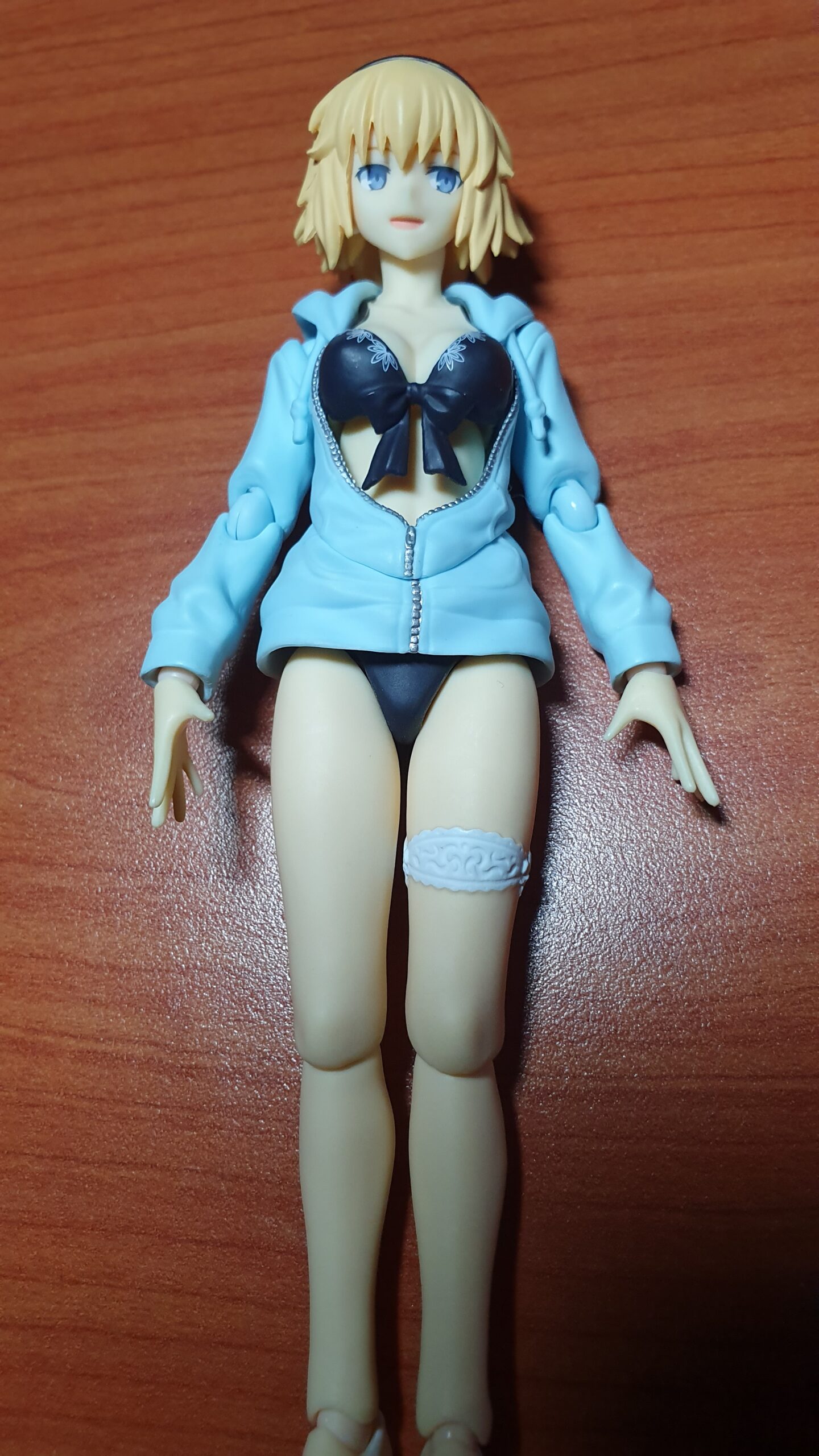 There’s quite a number of poses that you can make with the accessories and the base stand. The hula hoop allows you to re-create a number of the in-game poses and attacks (minus the dolphins). You can even replicate the CG art with the floater ring and handbag thanks to the sliding shoulder joints. 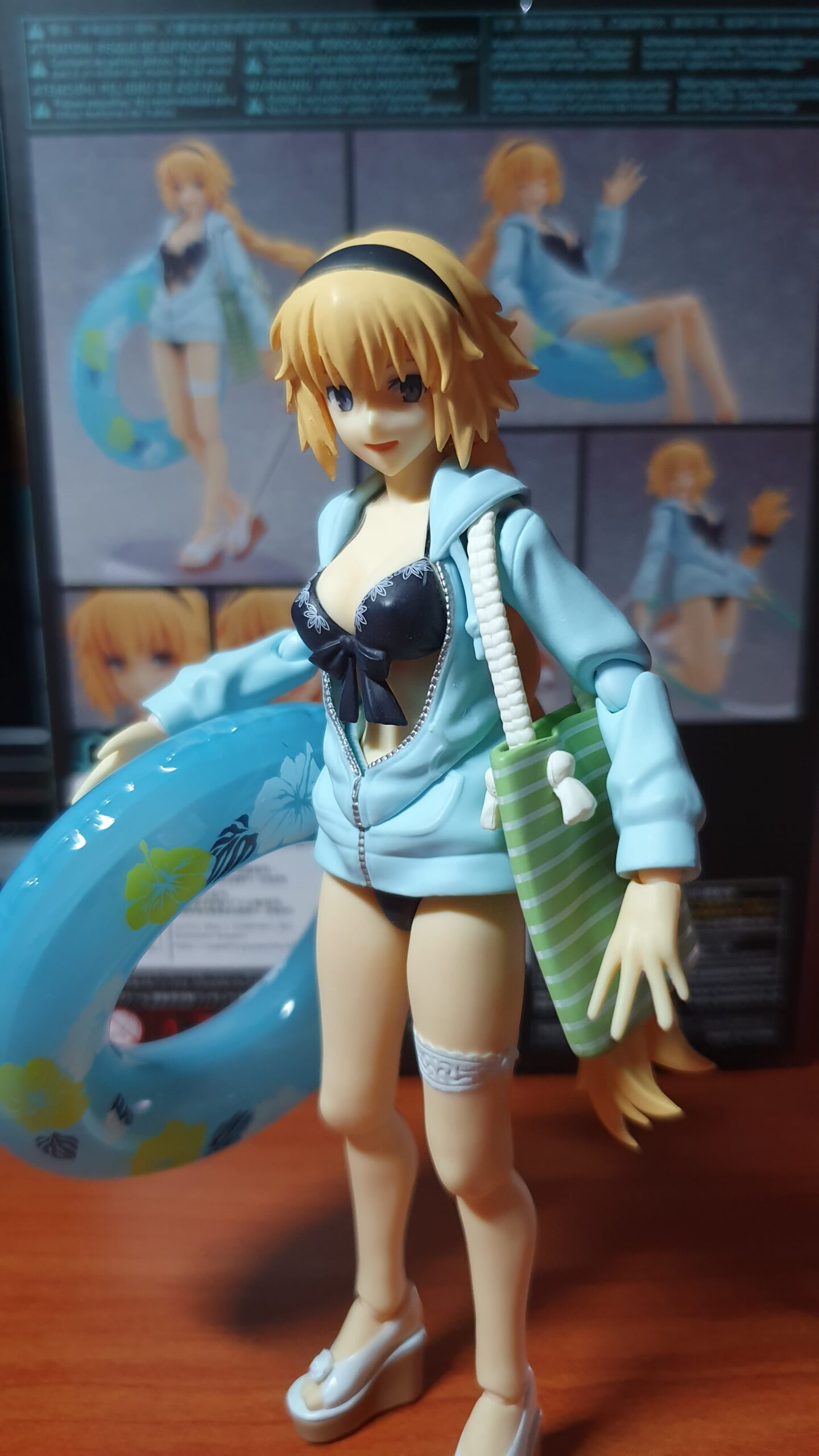 Extra gripping hands are also included for holding the hula hoop. For the floater ring and beach ball, there’s a right hand with a peg that goes into the holes of both items, allowing the Summer Version Archer Jeanne d’Arc Figma to hold either one for posing. 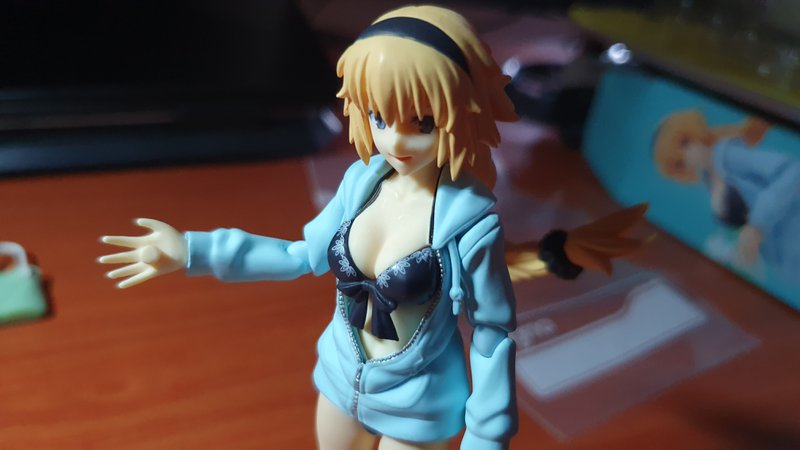 Right hand with peg for the ball and floater ring. 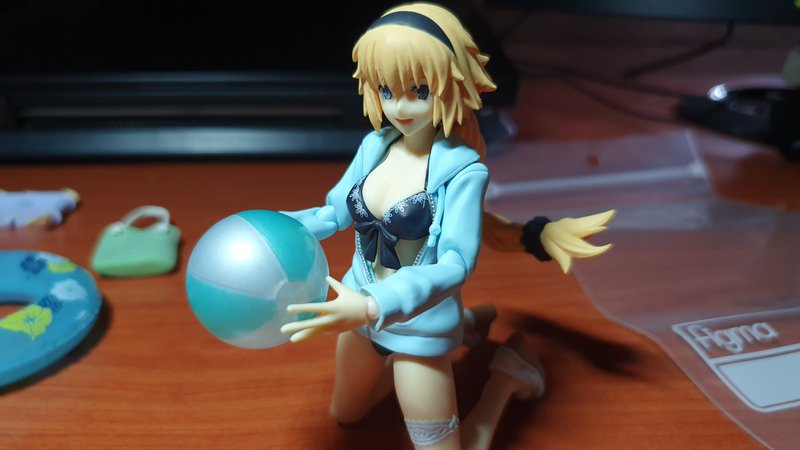 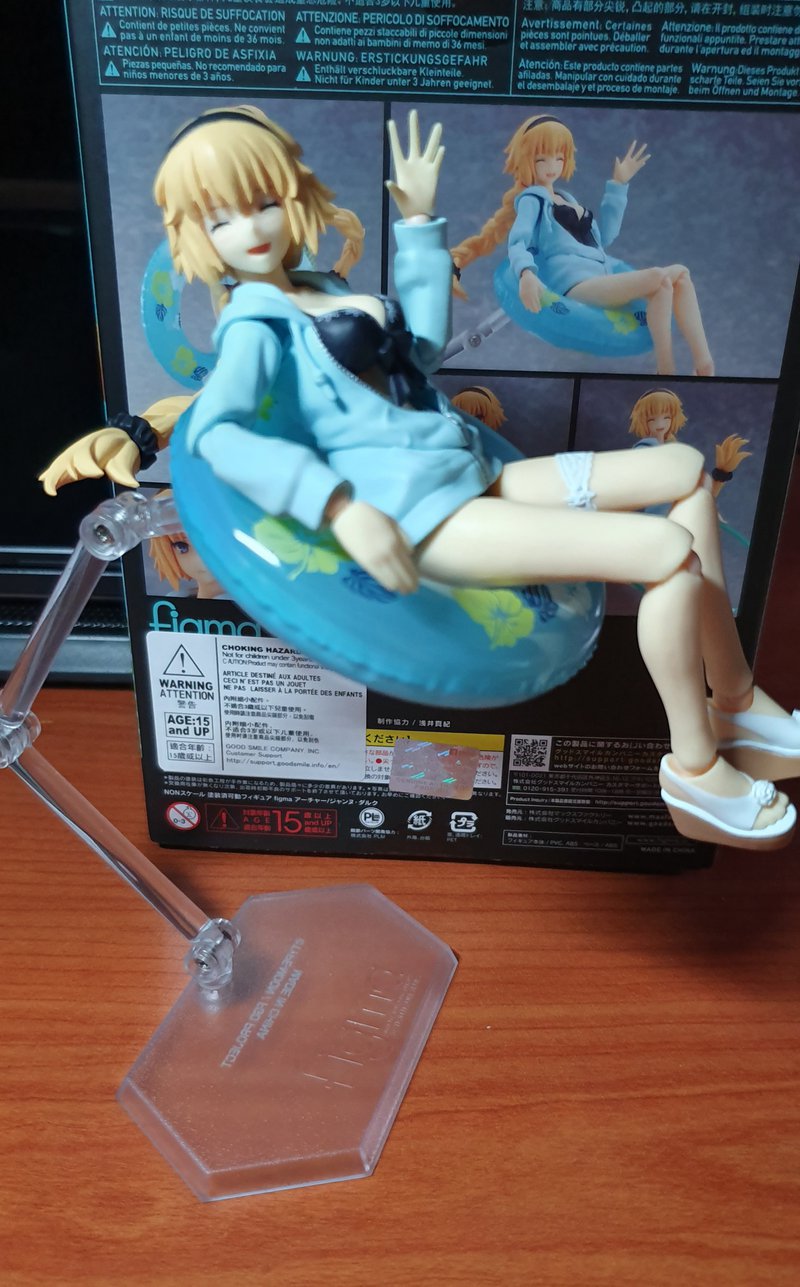 The base stand can also support the floater ring. 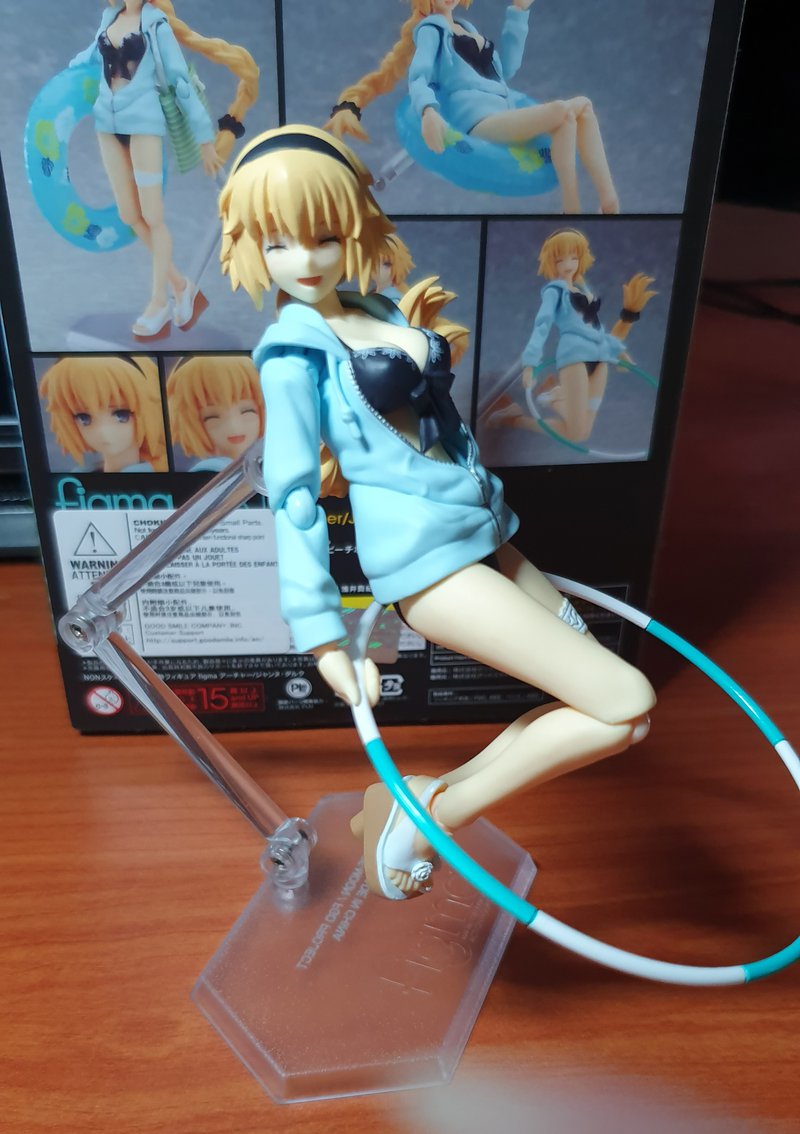 Dolphins not included in the package, sadly.

There are some considerable limitations to the Summer Version Archer Jeanne d’Arc Figma’s articulation. 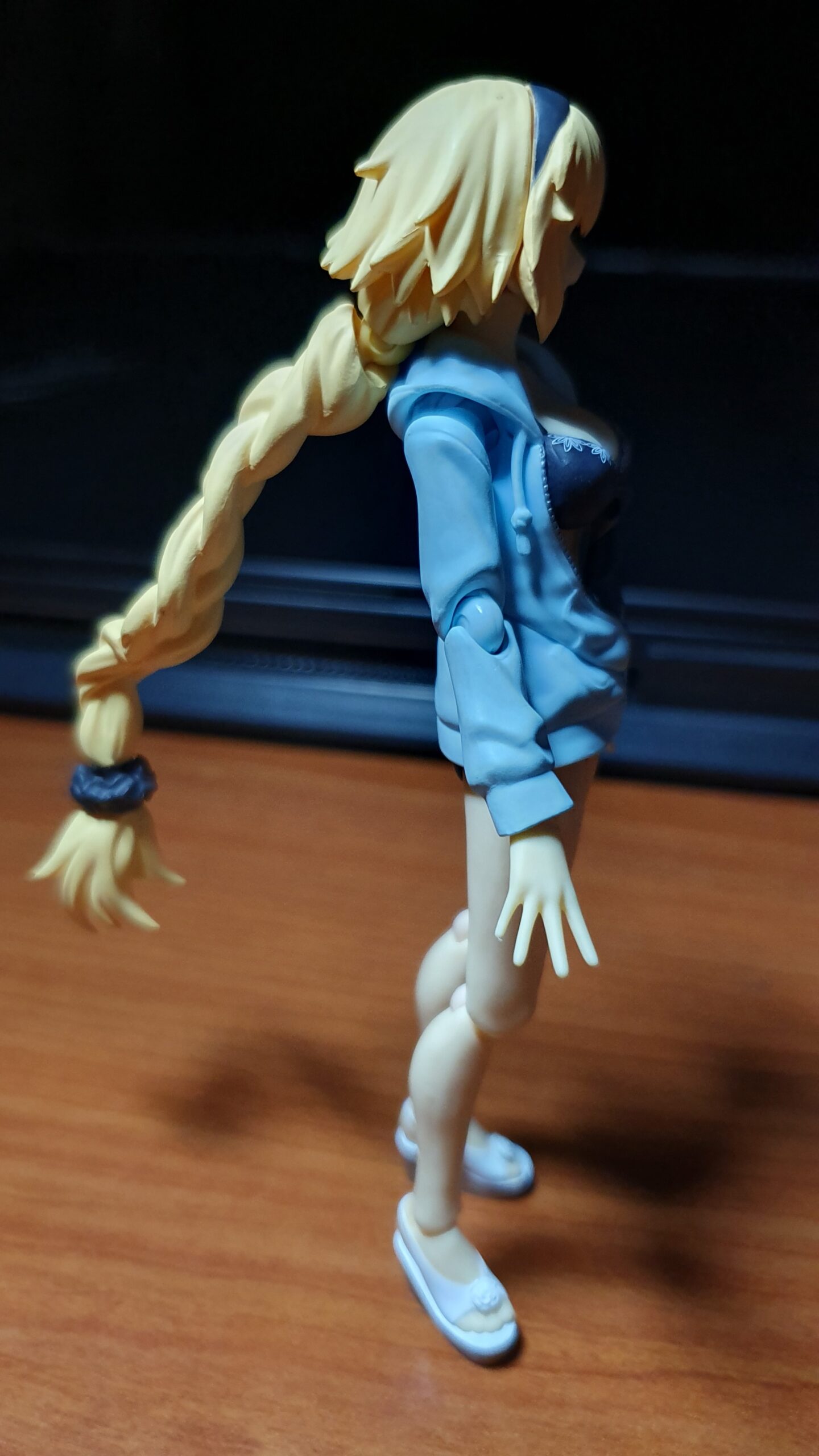 Fun fact, the braided hairpiece can be removed.

For one thing, the braided hairpiece at the back tends to get in the way with the upward head movement. This means that the figure can’t look upward as compared to other models despite using the same hinged ball joint on the neck. 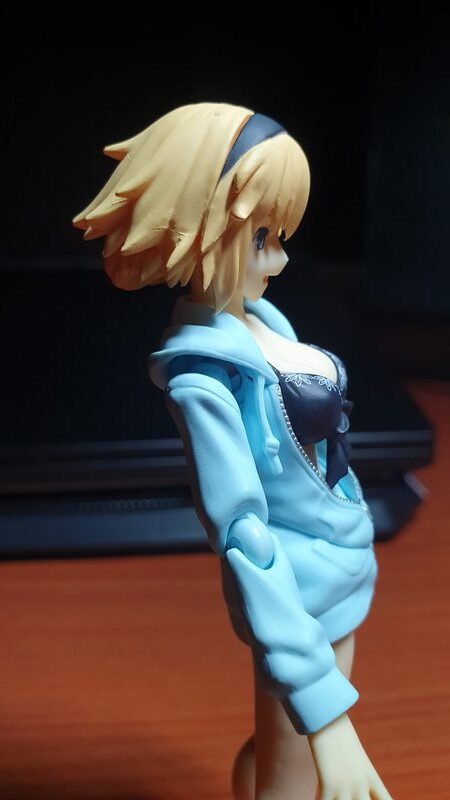 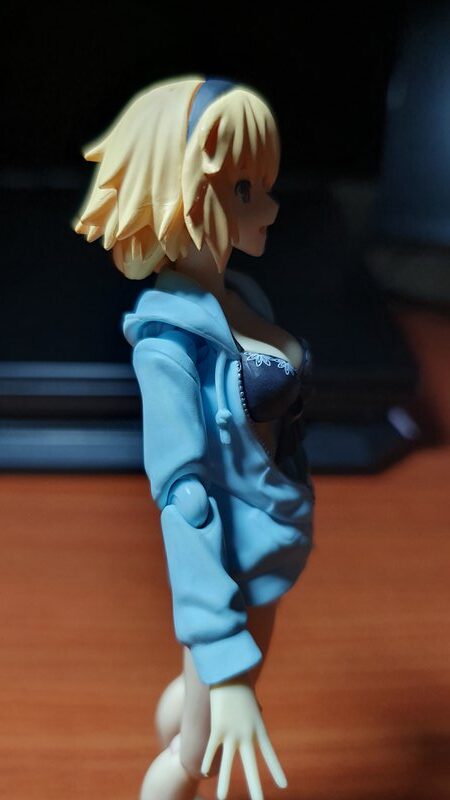 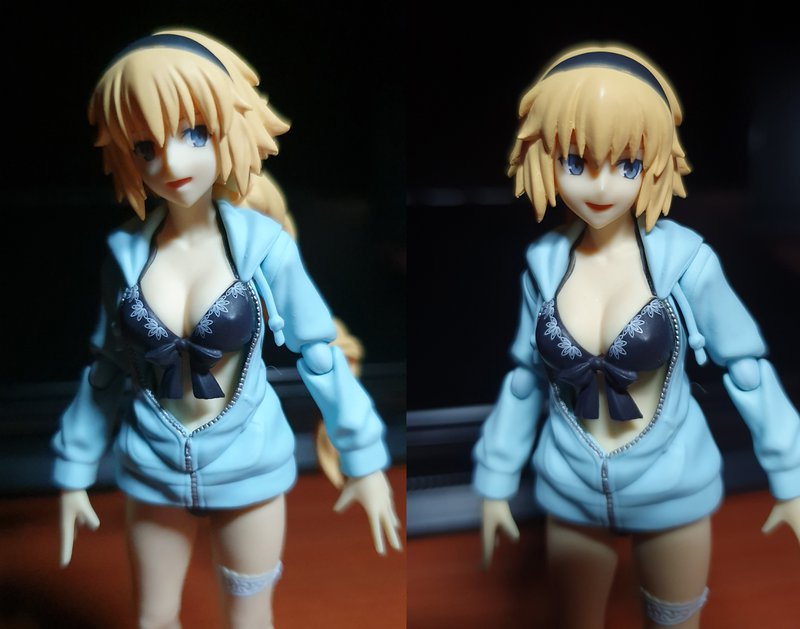 Side to side head movement.

While the hair braid can be removed, upward motions are still restricted because of the hairstyle. Downward motions and side to side head movements are still unimpeded though. Her shoulder joints can also fold upwards at a perpendicular position to the ground, while the elbow joint makes a decent past-45 degree bend. The shoulders are rather limited when it comes to upward folding because of the parka’s hoodie, but thankfully upward rotation isn’t much of an issue.

As for the hands, they have a far greater range of bending thanks to the small hinged ball joint on the wrists.

The legs however have some of the bigger limits in this Figma. For one thing, they can swing forwards until they’re also perpendicular to the ground, much like the arms. They also cannot do a 180-degree leg split, though the bend range is rather close enough. 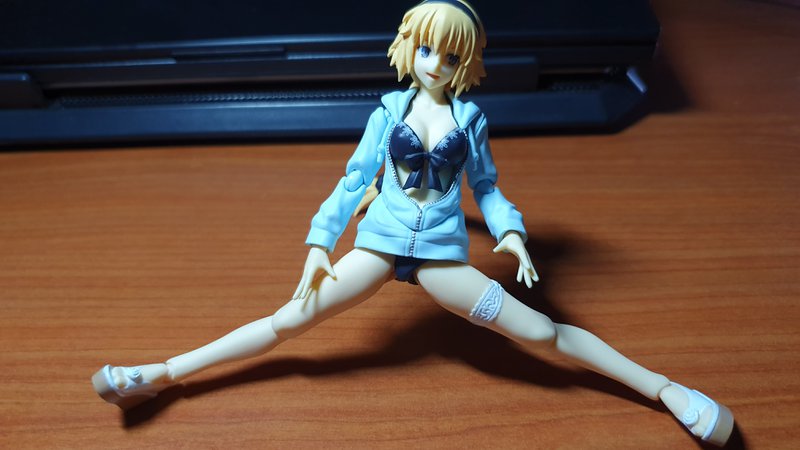 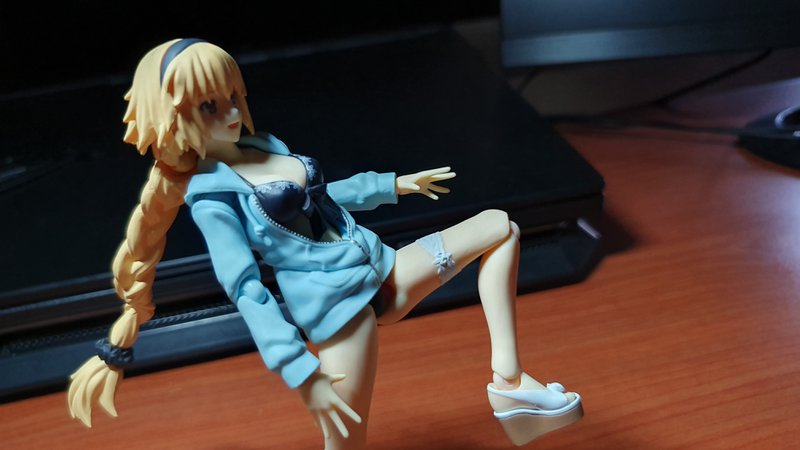 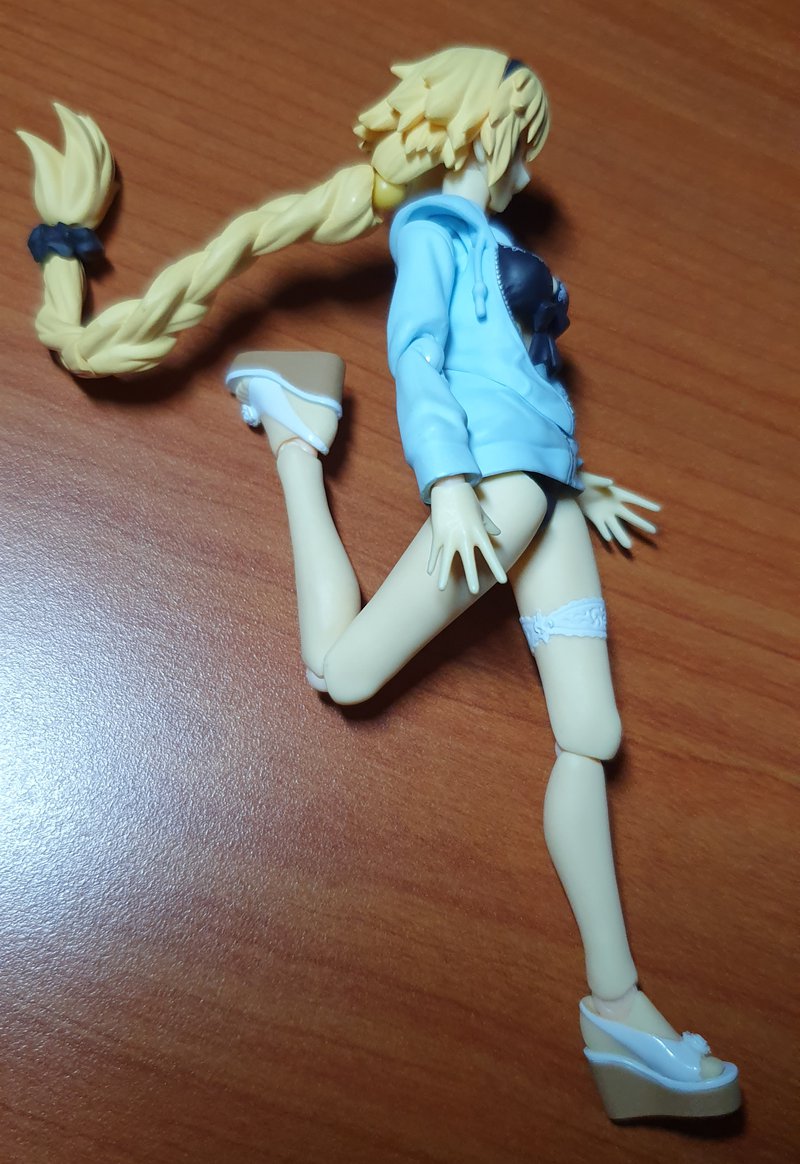 One thing that I do like about this Figma is that the legs can swing backwards to an extent. The knee joints allow for a decent 45-degree bend as well, which allows for some basic walking and running poses. The foot joints can also bend forwards and backwards, adding more options for posing.

While the Summer Version Archer Jeanne d’Arc Figma has a lot of detail, there’s still room for improvement on this product. For one thing, default and pouting faceplates only have eyes facing to the figure’s left. While this design accurately recreates the in-game art, it severely limits your options for taking photos since you have to face the figure to your right. 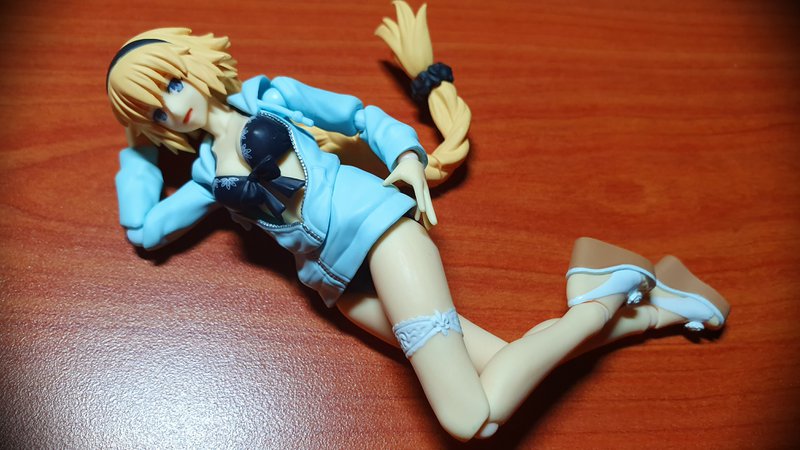 More options would’ve been nice to have, like having a faceplate with eyes in a neutral position.

The beach parka of the Figma is also molded over the body, with a segment just above the hips. This also limits how far the leg can bend upwards. Sitting poses and ab crunch motions are thus limited in range. 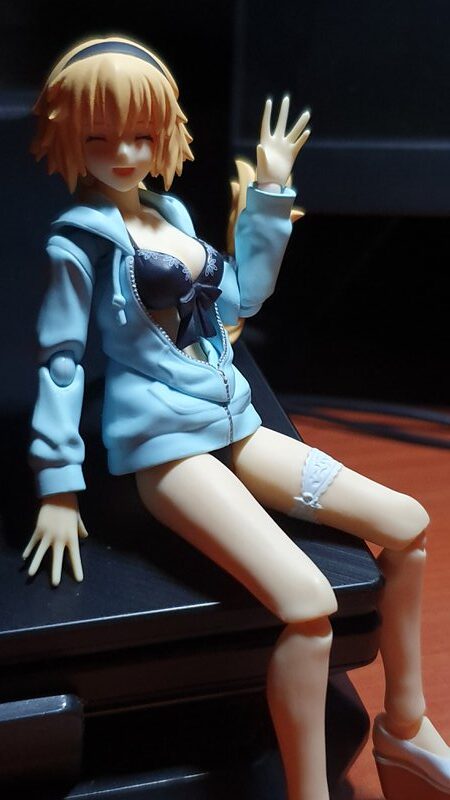 Posing her without additional faceplates can be a challenge, but a very rewarding one.

One thing I did enjoy though, despite the shortcomings are the other poses that can be made like the (fittingly enough) French girl and supine poses.

It would probably be nice if I can find another swimsuit Figma with the same body type and less restrictions on clothes. That way I could transplant the head and use compatible faceplates from other Jeanne d’Arc Figmas for more options in posing.

All in all, I still found the Summer Version Archer Jeanne d’Arc Figma rather enjoyable to pose. The lack of motions that I wanted ended up making me look for more creative ways to take nice photos of her.

If you like what you see in this review, check out the Summer Version Archer Jeanne d’Arc Figma at the GoodSmile Shop for JPY 8,800.