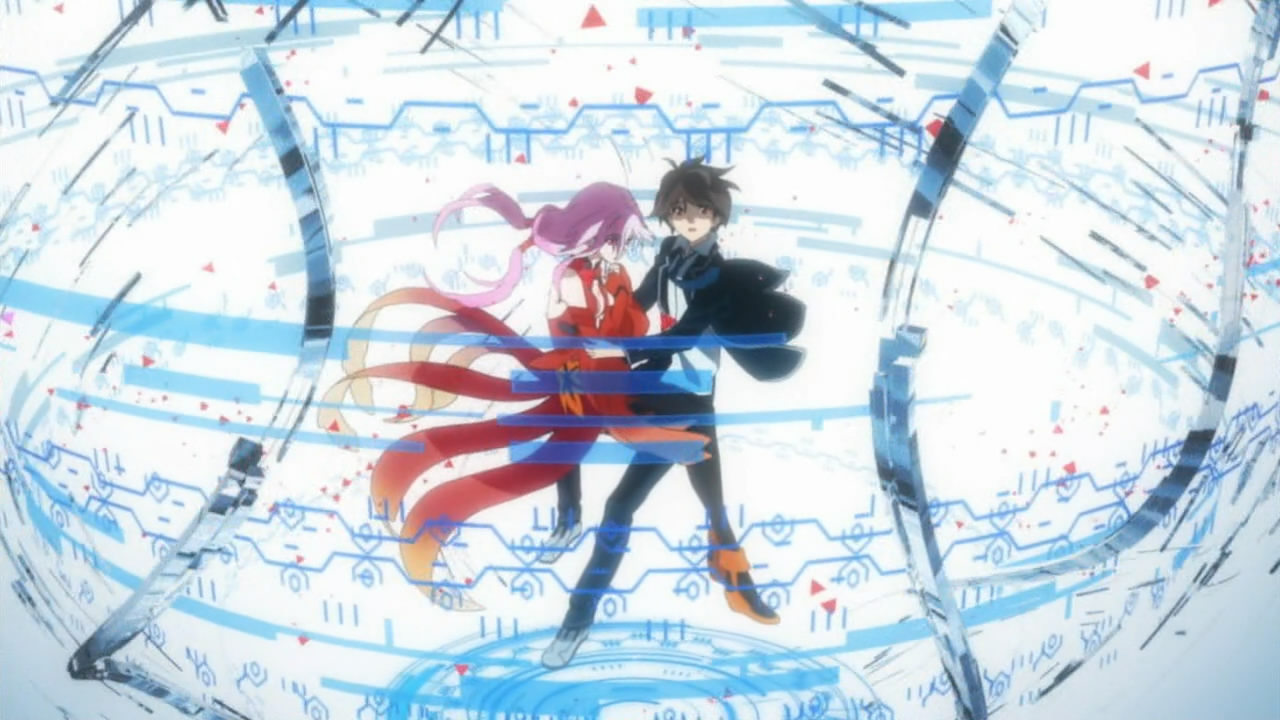 The right to use my Friends as a Weapon.

That is the Sinful Crown

Finally! I got to review this series, long after it ended and after changing the site’s layout featuring GC. Well, the post got delayed, since this was originally written for the Orange Mushroom, which is a company newsletter in where I’m working. -C

Last month marks the end of the Winter season anime in Japan, which also marked the end of the two-season anime Guilty Crown. Coming with surprisingly crisp art, stunning and fluid animation, along with the powerful music and vocals by renowned band supercell, the anime ended with a bit mixed reactions from the community — both fans and detractors alike.

Guilty Crown (ギルティクラウン Giruti Kuraun) is a 2011 Japanese anime television series produced by Production I.G which airs on Fuji TV‘s noitaminA program block in October 2011. Written by Hiroyuki Yoshino, the series feels like that it is the spiritual successor to Code Geass, an anime that he had served as an assistant to the show’s creator, Ichirou Ōkouchi.

Set in post-apocalyptic Japan, Guilty Crown is about a young high school kid who receives a power to ‘use his friends as weapons’ drawing out different tools and items that ‘form the shape of their hearts’. The series is heavily laden with themes of friendship, sacrifice, humanity and of moral ascendance. It also tackles the questions of ‘What to fight for’ and ‘fighting for what is right’.

Shu Ouma – the Main Protagonist of the series. A very quiet and somewhat aloof character of the series, he holds within himself a dark and forgotten past that is linked to the beginning of the Apocalypse Virus. After meeting with Inori Yuzuriha, he acquires the “Power of Kings”, which allows him to draw out various objects from people.

Inori Yuzuriha – The main heroine of the series. Member of the Funeral Parlor / Undertakers, which fights against the incumbent government, which is a provisional government by the United Nations as the country still reels in the aftermath of the Apocalypse Virus. Inori meets Shu in a chance encounter after she tries to escape arrest, and with her she carries a Void Genome, which contains the Power of Kings. She is a very silent person, but very ambivalent to pain and oblivious to social nuances.

Gai Tsutsugami – Gai is the leader of the Undertakers. He is strong, and possesses a strong dedication to the cause. He has a secret wish, that coincides with his fight.

Ayase Shinomiya – Ayase is also a member of the Undertakers, who pilots an Endlave (Endoskeleton Remote Slave Armor). She uses a wheelchair, but this doesn’t stop her from piloting an endlave as it is controlled remotely via nerve signals. She has a strong self-confidence in her own abilities, and does not want to rely heavily on others. She is very attached to Gai, to the point of having romantic feelings for him.

Tsugumi – is the super hacker of the Undertakers. She is highly-skilled in hacking, and she is very supportive of Ayase. She’s very perky, and she loves cosplay (to the point of dressing Ayase in different outfits).

Music for Guilty Crown has multiple composers, and despite this the themes and tunes mix well with the scenes they play in. Euterpe, Bioc, Hill of Sorrow, and Departures, are note-able tracks to name a few. The series OP and ED ( ‘My Dearest’ and ‘The Everlasting Guilty Crown’) were given powerful renditions by the hit niconico band supercell. With all these, it is possible to lose yourself to the story, and to go along with the building suspense of the show.

Art is beautifully rendered by redjuice, a doujin artist that gained fame for his artworks in Pixiv (Japanese social networking site for artists). The character art style makes use of light, thin lines with soft, blended colors that are not painful to the eyes. The scenic backgrounds of every episode also imitate the same style as the character art, even in contrasting scenes that are heavily-laden with void art.

The voids reflect a different feel however; they are portrayed well with the usage of CG coloring, which gives off an effervescent, alien feel.

Guilty Crown initially follows through with the concept of a boy-meets-girl-then-saves-the-day-with-special-powers, albeit doggedly, as Shu’s constant issues with a lack of self-confidence and taking things the wrong way. This is compounded with his social ineptness, and in the long run, causes him and the series to follow an initial slow pace. The next few episodes then give off a lot of “wham!” moments, which is very similar to the treatment of Code Geass R2. The series is halved in two arcs, most prominently covering his growth and development from a very socially awkward hero to someone who is determined to save the one that mattered the most.

So, do I feel guilty in enjoying it?

Fan reception to this series is divided, as there are many who enjoy the series as it is (as a form of entertainment), against those who are enraged about the series’ glaring plotholes and story inconsistencies. However, despite this, many watch Guilty Crown because of its emotionally powerful scenes, as well as were really looking forward to how the writer will wrap things up in the end. Dialogue and characterization was consistent, although there were hiccups with sudden minor changes and glaringly wrong decisions made in certain situations.

Also, the story seemed to be lacking in sidestories that tell the side or feature the other main characters; as sometimes they are seldom seen in action or given screentime. Sometimes it leaves you wonder what they have been doing all this time while something major was happening. Fleshing out these side stories and adding an extra character focus would add an extra oomph.

And finally, the issue with the ending of the series was taken into account; as many view it as very short, simplistic, and very ‘plain’ ending for a series with a detailed and crafted world.

Guilty Crown is a very engaging series to watch, especially with its high animation detail and powerfully written dialogue that shows the emotions and development of each character. The series also boasts tracks that are well-made and are well-matched to each scene they play, with powerful vocals that deliver well. If you could, however ignore some of the issues with plot consistency and characterization, you’ll definitely enjoy this series to the end.