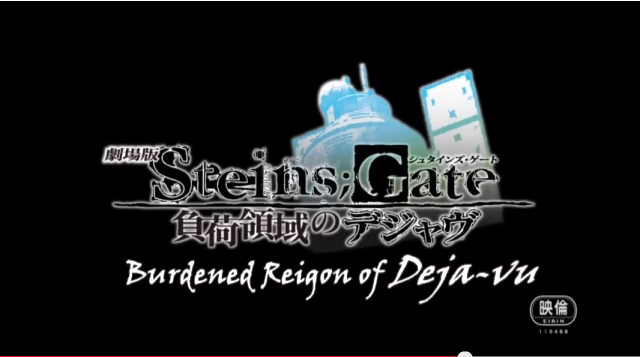 So just recently we’ve seen a new trailer for Steins;Gate movie that is coming this year and in this world line. The trailer kicks off with a haunting tune with [ Believe in Me ] (Steins Gate Original Soundtrack, 5pb.) and with a voice over of Kurisu telling us what’s on her mind and what she’s thinking. Along with that are superimposed words on the video telling us that there is a world line that everyone hasn’t experienced yet, and flashes of characters that are wearing clothes that aren’t seen in the anime and the game; which further reinforces the line that it’s about a different world line. She hints that she remembers the events in other world lines, and it might be quite possible that yes, it is indeed a world line we have yet to see.

And oh, Mindfuck #1: it begs the question: Is the narrator or Kurisu talking to herself, to Okabe, or to you, the audience?

<-WARNING: MAJOR SPOILERS ON THE MAIN SERIES FOLLOW. IF YOU HAVEN’T PLAYED OR WATCHED STEINS;GATE SKIP THE FOLLOWING SECTION.->

My guess is that the world line that we’re talking about would be going along the lines of 0.337187~0.11xxxx%. somewhat closer to the original Alpha world line where Okabe gets killed in 2025 (Operation Ragnarok? Suzu mentions this in passing that he will fail; most possible be captured in the end and sent 70 million years into the past as a death sentence), Daru does not create a time machine and Suzu does not attempt to give Okabe the IBN5100 (since 0.337187% is where Daru creates a half-finished time machine and Suzu fails to give him the IBN5100), and Kurisu is captured by SERN and is forced to create a refined version of the time machine. It is a world line that no one has witnessed, and would have also carried a very heavy ending for all of the characters—and possibly where Okabe went to the past, with Irreversible Reboot as its end.

And now, for some speculation:

The movie might indeed cover the initial Alpha World line 0.00000%, and Makise might remember the events in the other world lines, before Okabe blindly dashes through the world line. Makise might try to save Okabe from making mistakes (hence the line in the movie “it’s meaningless if it’s not you”), which in turn she tells him what she remembers in the other world lines. Okabe *might* in turn create a series of events that will eventually lead to the world line of 0.337187% (value where Suzuha fails in getting an IBN5100), and which would push 0.337187% Okarin to make a decision to move world lines once more towards the Beta Attractor Field (when he fails, he tries Operation: Valhalla in 2011, where he tries to extract Makise from SERN and go back to Akihabara with her but fails). This movie, in which my Future Gadget neurons are brimming with excitement, would tell us the story of Kurisu’s despair in remembering the other world lines and telling Okabe what he must do in order to change the present and the future.

To sum it all up:

My senses are tingling. The organization has yet to make its move. Our victory is at hand.