This week marks the end of many Fall 2011 series – to which we had a wide variety and array of titles and themes presented and shown to us. Though many didn’t like or enjoy them, I did. And one of these anime titles I’m talking about is Mashiroiro Symphony.

Sentai Filmworks Licensed the series in North America, and is slated to release the series come 2012. A review on their subtitles / translation may come in once I’ve acquired their release.

The story of Mashiroiro Symphony primarily takes place in the fictional town of Kagamidai (各務台), which consists of two distinct districts dubbed the “Old District” (旧市街 Kyū-shigai), which primarily contains traditional housings resided by upper class families, and the “New District” (新市街 Shin-shigai), which is generally inhabited by working class families. The town also houses two private academic institutions undergoing a merger: the Yuihime Girls’ Private Academy (私立結姫女子学園 Shiritsu Yuihime Joshi Gakuen), a notorious upper class girls’ academy nicknamed Yuijo (結女), and the Kagamidai Private Academy (私立各務台学園 Shiritsu Kagamidai Gakuen), a coeducation school which Shingo, the protagonist whose role the player assumes, attends. As part of the merger, students from both schools are selected to participate in a test class at the Yuihime Girls’ Academy campus, an act which is initially opposed by the female student body. 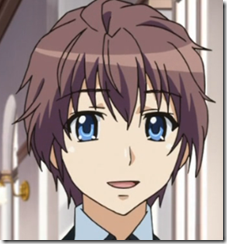 The protagonist of the story. He was sickly when he was a kid, and now is well and loves to take care of everyone around him. Good at housework and putting other people before him, he makes all of the girls fall for him. And yes, he is oblivious to their affection. 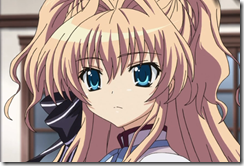 She is the Student Council President of the Yujo Academy in which Uryuu’s school is merging into. Uryuu first meets this feisty girl before he enters the school, and she is the game’s main heroine. She is greatly opposed to the merger of the two schools.

And by the way, she is the daughter of the school’s principal. 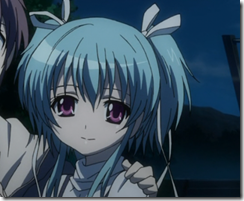 The protagonist’s sister. She is quiet, but strong and level-headed. She understands her brother the most, and is very supportive. She also easily gets lost, and also is quite attached to her brother. 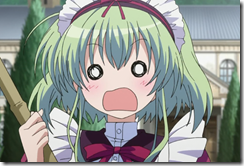 Yup. The foreigner of the group, and the only maid. She takes to the academy as it were her home (there’s a reason for this), and one of the first persons to greet or meet Shingo in Yuijo. She’s the genki girl, besides Sana. She loses a bunch of stuff that she is tasked to do, since Shingo can pretty much do a better job at it, which she takes it as a challenge. She also takes a liking to Shingo, as she desires him to be her master.

She is the quiet and gentle sempai of the girls. She is very caring, especially towards animals. She is the founder of the Nuko Club (ぬこ部), a club that takes care of injured animals and returns them to the wild. She is also a part-time worker at the maid café Dolce, in order to help with the clubs expenses (since it isn’t officially recognized, they don’t get budget from the school). She is very kind and likes to have Shingo around. 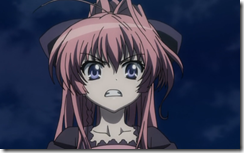 She is the feisty and no-nonsense character who is always at loggerheads with Shingo. She’s very protective of her Miu-sempai, to whom she adores. She’s also fond of cats.

Sana is the only one who gets really physical in terms of violence with Shingo, but eventually she actually falls for him (well, it is an eroge).

Pretty much standard art for an anime; the characters retained the design they had from the game. One thing that actually makes me wonder though: the eye color sometimes bleed over irises of the character’s eyes.

Though I have no qualms about it, it just seemed odd; but maybe it’s just a stylistic peculiarity that I have yet to appreciate.

There isn’t much I could say about the story on how it remains faithful to the game material (there isn’t an english patch yet released / there isn’t a group that’s taking this up for translation yet as of this writing) and my understanding of Japanese is still at the Elementary level.

However, I could point out that the anime took a somewhat a Clannad-esque treatment to the story: it seemed that they took some stuff from the different routes of the game’s heroines and they finished it off with one girl’s arc/ending. Which was nice considering we were able to get and witness the buildup of tension between one girl and the protag. The choice of heroine, however, eludes me, (since what seemed the main girl wasn’t the one chosen).

One particular thing I’d like to stress was that a character’s reaction to the Shingo’s choosing one girl was quite realistic: she did cry over it and exerted a lot of effort for her to be able to come to terms to it (although having her being able to talk to Shingo upfront after one episode was quite fast; but who knows how girls actually think XD). In all its being almost realistic, the way each character showed some signs that they still like Shingo despite him having chosen one girl made it surreal.

Mashiroiro Symphony was a great ride, despite its slight shortcomings in the character development department in terms of being that fast in ending the story (12 episodes seemed short) but if it were the nature of the story…

There are bits and pieces of sweet moments; in which you might expect something that might come out of it. There are also times that you’d wish that the characters might’ve done something differently to increase the tension between the characters. Also, the moment that Shingo chooses one girl out of the others would’ve been given more flavor than just having one girl crying over it.

All in all, Mashiro Symphony is one ride that’s a hit or miss. You might not like it, but you’ll certainly not hate it altogether, either.