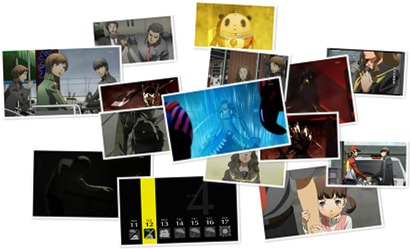 And finally one of my most anticipated series has already made its way to the TV screens! The anime adaptation of the highly-rated PS2 game, Persona 4 was aired two days ago, and after watching the 24-minute pilot episode, it gave me mixed feelings, mostly positive. I suggest playing the game first before watching it, as the pacing of the first episode was much faster than expected, thus, a newbie would find it difficult to appreciate everything.

One of the things that I liked about the first episode is the music. Most of the music pieces heard were from the game itself (even the opening sequence for this episode – Pursuing My True Self, which gave me a great feeling of nostalgia). Some of the songs heard include Reach Out to the Truth (battle theme), Welcome to the Velvet Room (Aria of the Soul) and Like a Dream Come True. Also, the one we hear in the trailers turned out to be the episode’s song for the ending sequence and I think was a refreshing addition to the show.

Another thing I appreciated from this episode is how the first battle scene was presented. Despite playing the game, it was exciting to see how Izanagi had a real battle against the shadows, using both physical and magic skills (Zio?) throughout. If this will have a BD release, I think watching this scene over again would definitely be worth it. Also, it left me a very good impression of what to see in the next battles.

Adding a few game elements to the episode was a big plus for me, as well. I suppose director as well as the whole staff wanted to treat P4A as a real adaptation, since you can see a lot of references such as the calendar and Narukami’s character stats. Narukami’s calm nature and… well, his lack of lines, were also apparent in this episode, making me feel like I’m “playing” his character while watching. Again, this is much appreciated if you finished the game before watching.

I guess one that I was not totally expecting was the pacing. What took me an hour and a half to accomplish was only done in a single episode. There wasn’t much details to other side scenes too, but of course it’s understandable since they need to cramp approximately fifty to seventy hours of game time in more than twenty episodes. The fact that I played Persona 4 in English also made me a little unfamiliar with the Japanese cast, although Chie’s (Yui Horie) voice was the one I loved the most. After watching the first battle, it made me wonder if Narukami will be switching Personas throughout or stick with Izanagi until the end (I’m hoping to see more Personas, of course, and I’m looking forward to which ones will be shown in the future).

Overall, it was a satisfactory pilot episode for me. Seems like we’ll be seeing Yosuke’s shadow in the next episode, and I’m expecting a few more characters to appear next week (Daidara and Social Links, anyone?).

.   On November 10, Minori Suzuki will be releasing her long-awaited fifth single “Saihate.” The titular song will be the ending theme for the TV anime Fena: Pirate Princess, which will begin airing in Japan in October. A rock song with a dramatic flair,...