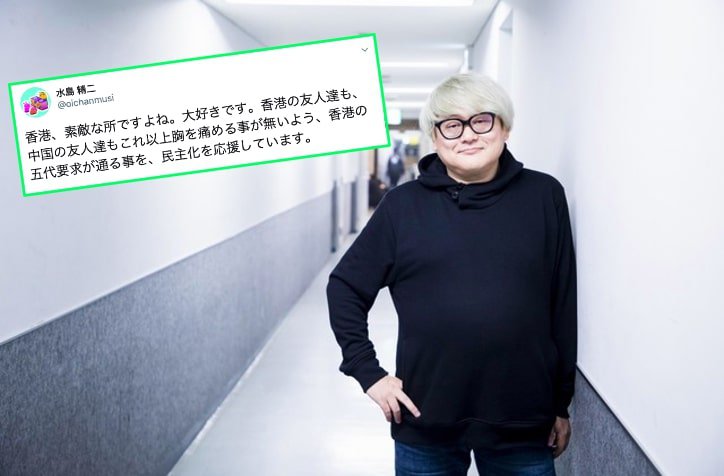 Hong Kong is a wonderful place. I love it. We are supporting the democratization that Hong Kong’s 5th generation demands pass so that neither Hong Kong friends nor Chinese friends will hurt anymore.

Recently, I feel that the number of followers in Hong Kong has increased. I support the democratization of Hong Kong. I support you.

I finally understood why many people mutter about the amendment but hear about China, which has nothing to do with it. Chinese money is invading the animation industry, so even if you can protest against domestic issues, you couldn’t say bad things about your sponsor, China. Well, there is a lot of Chinese capital.

After which Chinese Twitter users began commenting on the tweet, saying that his comments are foolhardy, ignorant, and are calling for a ban of his movies in China.

It is the year A.D. 2307. Fossil fuels on Earth have been depleted entirely, with mankind turning to the next available power source: solar energy.

During this time, 3 orbital elevators with solar power generation systems are built, each under control by the Union of Solar Energy and Free Nations (formerly United States of America), the Human Reform League (Russia, China and India) and the Advanced European Union.

However, not all countries are able to enjoy the benefits of this system, leading to widespread resentment and war.

Arising out of the conflict, a mysterious military organization known as Celestial Being appears, dedicated to end all warfare using Mobile Suits called “Gundam”.

This begins the stories of Gundam Meisters (pilots) Setsuna F. Seiei, Lockon Stratos, Allelujah Haptism and Tiera Erde as they are thrown into conflict between the 3 superpowers and the various other factions.

Description of Gundam 00 sourced from ANN.