Watashi ga Motenai dou Kangaete mo Omaera ga Warui! (called by many as Watamote for short), is one of Silver Link’s ongoing anime series this season. Popularized by netizens outside Japan, this manga-turned-anime portrays the everyday life of Kuroki Tomoko, a girl who had numerous misadventures in order to become a popular girl in their school. Her experience with dating sims and otome games would have been her main weapon towards getting the rosy high school life, but sadly, things had not been turning out like she planned. Most of the episodes revolve Tomoko, her brother, Tomoki and her middle school friend, Yuu, who was successful in making a gracing debut into high school.

With that said, only these three characters will be featured in today’s seiyuu chart! Despite the short cast, each of them were able to make the entire series interesting by bringing out the personalities behind their respective characters. Let’s start! 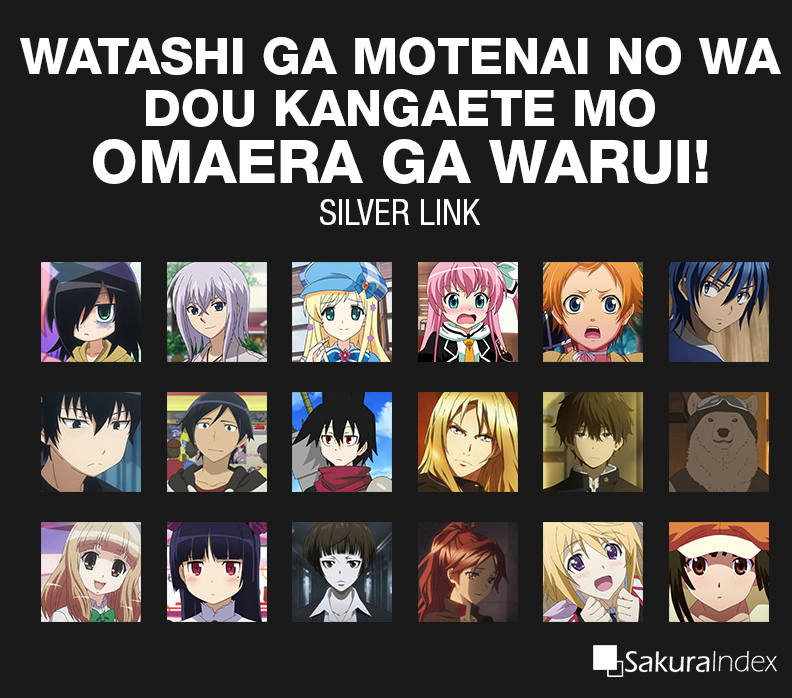 Kitta Izumi (Kuroki Tomoko) – Doesn’t have a lot of character roles at the moment, but her performance is quite versatile. She voiced characters like Tokura Misaki (Cardfight!! Vanguard), Cordelia Clauda (Milky Holmes), Michi (Weiß Survive), Benmaru (Brave 10) and Gear (Aoi Sekai no Chuushin de).
Nakamura Yuuichi (Kuroki Tomoki) – When we first heard his voice, we were thinking “aa, Kyousuke!” since it sounded a lot like him, and it turned out to be true. Apart from him (Ore no Imouto ga Konna ni Kawaii Wake ga nai), he also voiced characters like Rossu (Senyuu), Tsutsugami Gai (Guilty Crown), Oreki Houtarou (Hyouka) and Grizzly (Shirokuma Cafe). There’s other distinguishable characters in his seiyuu profile.
Hanazawa Kana (Naruse Yuu) – Clearly one of our favorite anime voice actors. We couldn’t stress that further. She has tons of famous roles, both main and supporting, and despite being known for her innocent imout0-like voice, she can also give life into surprising personalities into her other characters. Some of her known roles include Kuroneko / Ruri Gukou (Ore no Imouto ga Konna ni Kawaii Wake ga nai), Tsunemori Akane (Psycho Pass), Shinonomiya Ayase (Guilty Crown), Charlotte Dunois (Infinite Stratos), Sengoku Nadeko (Bakemonogatari) and tons more.

If you haven’t tried watching the series yet, give it a try! It’s a bit slapstick, but as you go through episodes, you’ll find yourself not only laughing, but also growing attached with the story, especially Kuroko. What did you think of the voice acting cast? Let us know at the comments!