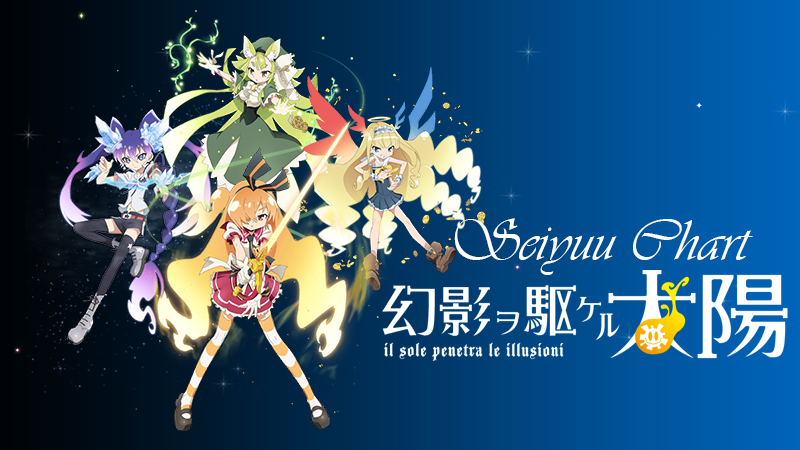 Gen’ei wo Kakeru Taiyou has piqued the interest of many fans of the magical girl genre; it tapped on the idea of using the power of tarot cards in order to change an individual’s destiny– whether it be good or evil.

The story begins with a girl named Taiyou Akari, a bright, cheerful girl, loved by her friends and relatives, much to the jealousy of her cousin, Fuyune. Fuyune’s untold feelings caused her to be infected by Daemonia, a negative energy that turns its host to lose oneself and cause misfortune or death to others. Getting into a near-death situation with Fuyune’s Daemonia form caused Akari’s powers to awaken, and thus, becoming an elemental user. The gathering of Akari along with a selected magically talented girls will later on make their team go through many trials of not only suffering, but also self-discovery. For those who have seen this might agree that it has similarities with Madoka Magica, but others contest it has it unique points as well.

On to the seiyuu chart! The main voice acting cast for Gen’ei features both veteran and new voice actresses you might be already be familiar with by now. View the chart below and read on for a few minute details! Kadowaki Mai (Taiyou Akari) – she was on a roll this summer with two magical girl roles, the other being Ilyasviel von Einzbern (Fate/kaleid liner Prisma Ilya). Her other voiced characters were Kamizaki Risa (Amagami SS), Usa Mimi (Kodomo no Jikan), Aomi Isara (Koi to Senkyo to Chocolate) and Hakase Satomi (Mahou Sensei Negima)

Tokui Sora (Tsukuyomi Luna) – Tokui seems to be getting more character roles lately, and we’re eager to know how she will progress in this industry. Her other well-known voiced characters are Katia (Fantasista Doll), Yuzurizaki Nero (Milky Holmes), Yazawa Niko (Love Live!), Daitoku Junna (Robotics;Notes) and Sasasegawa Sasami (Little Busters!). Knowing Little Busters will be having another series this fall, we’ll most likely see her again in action. She is also said to voice Hornet from Sekai de Ichiban Tsuyoku Naritai, also to air next season.

For those who have finished the series, what are your thoughts on the cast’s performance? The comments section is always open for your ideas!