So, we decided to add a bit of fun and interesting content in the site from time to time, like seiyuu charts. Most anime titles become a hit because of its outstanding voice acting cast, but many of the viewers don’t know (or bother knowing) who they are, and what other roles they have done in the past. Sometimes, when we watch a show, we suddenly have that “I heard this voice before but I don’t remember where!” moment, sometimes ending up asking others or searching it over the web to find out more. Seiyuu charts (like the one we’ll be having right now) is something I started because of this, and I thought it won’t do any bad sharing them to everyone else.  Without further ado, let’s get started with the first show for this season – Animation Do’s Free!

Free! – Iwatobai Swimming Club in a nutshell is a story of four (later on, five) high school boys with a passion for swimming (and feminine names, to top that). Nanase Haruka, Matsuoka Rin, Tachibana Makoto, Hazuki Nagisa were swimming together since elementary school and have joined competitions, until that time when Rin had to move to Australia to pursue further studies. Time jump, Haruka, Makoto and Nagisa study together at the same school and, by a strange school swim breakout, they meet Rin again, with a seemingly different attitude, but his love for swimming perhaps, much stronger than before. Free! is being animated by Animation Do, a subsidiary of Kyoto Animation (which explains the usual art similar to K-On!, Hyouka and Tamako Market).

On to the main character seiyuu chart!  We have a very dynamic voice acting cast for the series, and a pretty interesting one at that. Take a look at the image below for quick reference: 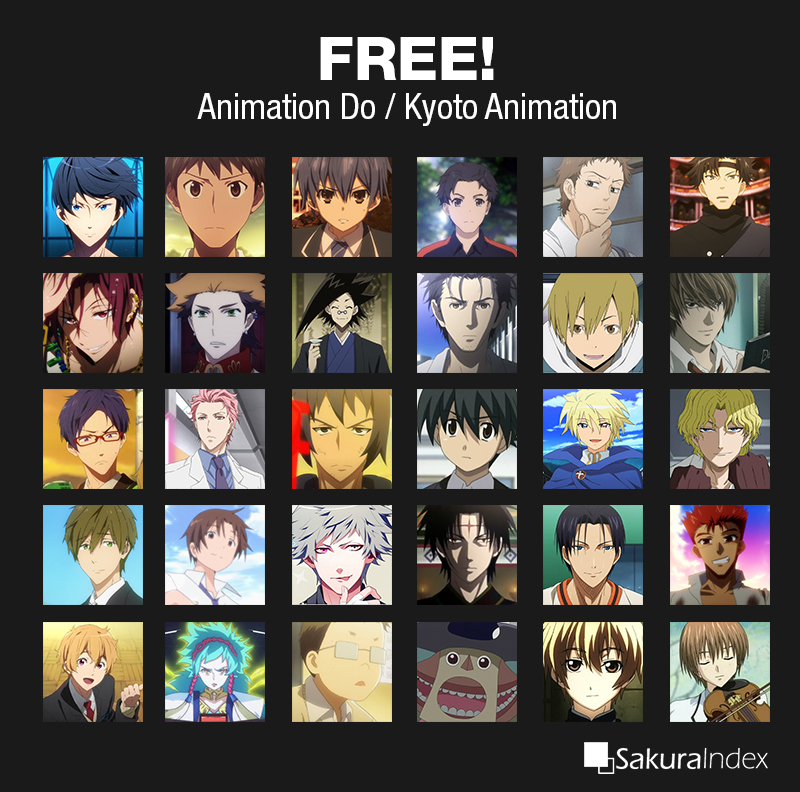 Since there isn’t enough space to fill out all previous voice acting roles, most of those in the chart are from either their most recent series or well-known characters from a finished show. We’ll show more of their other character roles as we publish more of these later on.

Personally, I think the seiyuu cast is already meeting everyone’s expectations. Each character has a unique personality, and from the five of them, I’m looking forward to Rin’s character (I love Miyano Mamoru’s voiced roles) and how it will be portrayed in the subsequent episodes. Of course, there are other minor, supporting characters and you can view the seiyuu cast from Free’s official website or through these sites: [AniDB] [ANN] [MAL].

That’s all for now! Stay tuned for next week’s seiyuu chart. Enjoy!